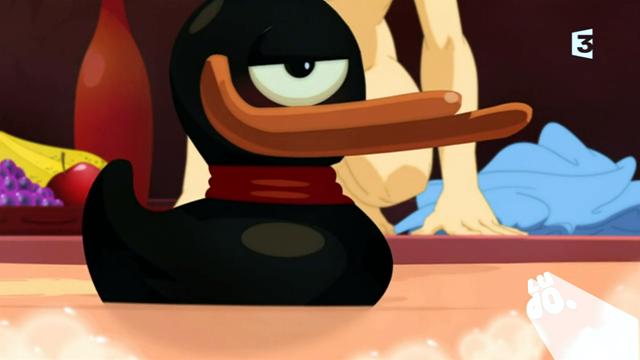 -Wakfu, S02E14
Now that, my friends, is one smug looking duckie.  As one would expect from a floating convenient censorship device.  Not that he doesn't have reason to be smug... 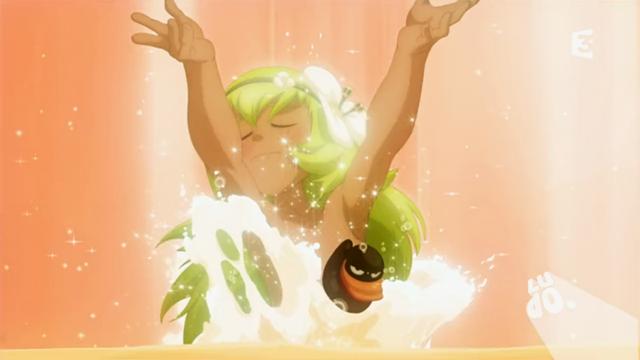 ...after all, rubber duckies get to hang out in bathtubs with teh hawt chix0rs. 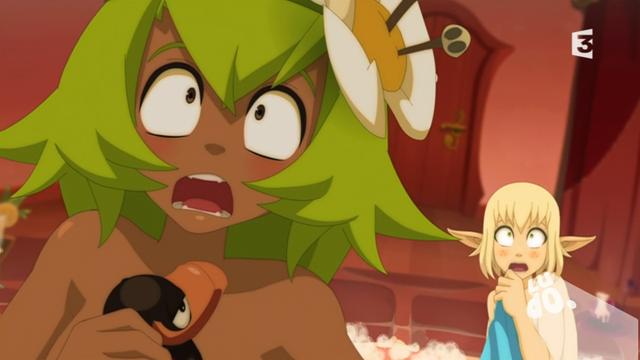 Yes, he has a reason to be smug.

Interesting show, this Wakfu.  Or, more correctly, interestingly animated show.  From what wikipedia says, it's all Flash-based, yet it's much better than any Flash cartoon coming out of the US.  To be honest, if I didn't know better I'd say it's animated the same way as any anime, just with a more cartoony look.  A look that fits the tone of the series, I might add... though since I've only seen the one episode, I'm hardly an expert on the thing.  A fun way to spend 20 minutes, though.

(tip o' le chapeau to Mauser for the pointer!)

1 You're very Welcome.  Personally I love the show.

I first ran into one of the artists on DeviantArt, who had done the character designs for a game called Dofus, then the MMORPG Wakfu that followed.  Beautiful stuff.  French artists have a rather distinctive style.

Then I found out there was a cartoon based on it.  I know it's CGI, but I'm not sure if it's flash based.  Probably something more advanced.

The first season is highly recommended.  The Big Bad has one of the most unusual and unique motivations I've ever seen.  And there's some serious badassery in the fight scenes, as well as humor.

The only downside is that each season (of 24 eps) is marred sometime in the middle with a three-episode Arc about some kind of Soccer/Rugby/Calvinball sport in the world.

But all in all, it's brilliantly and cleverly written, and the TL that I have on hand does a pretty good job in dealing with the numerous French puns.  And there are some very sexy secondary characters too.  Although this was the first time I saw a Duck.

(Also, if it helps, a Kama is the name of the gold coin that is the currency of the world.  And Ruel is from a "race" known for ruthless pursuit of wealth.  (But it isn't an ethnic stereotype.)  And Triestepan is from a race known for brave and heroic warriors who are also incredibly dense.).

2 I couldn't remember that scene from Wakfu, and I would have - hey, new episodes!  It's been a while.

Have you been watching it or did you just pick up that episode?  The first season of Wakfu started slow but (as Mauser notes) ended up awesome.

3 Oh, and if you haven't been following Wakfu, be glad that you didn't come in on the teh hawt chix0rs a couple of episodes ago.  Be very very glad.

5 Hypozeuxis, I've heard of Duck Duck Go, yes.  And thanks to Brickmuppet, I own a copy!

6 Hmm.  I thought I'd been reading your blog for several years, but since I don't recall either of your posts about Duck Duck Go, maybe I was still only a sporadic reader (just following links to occasional posts).
Glad to hear that you both own and enjoy it! Would you be interested in one of the sequel games?  There are a couple already available.

7 You know, it suddenly occurred to me that he might be an African duck.  More particularly, the Ubangi tribe - the ones who put the plates in their lower lips, er, bills.

8 Hypozeuxis' comment that I referred to has been removed because one of the links included gave my computer a virus.  It's reproduced below with the links removed:

Only sort of related, but today I ran into a board game that uses duckies, and in fact has commissioned a lot of custom designs and allows you to choose the ones in your set: (refers to Duck Duck Go) Even though it is themed as a kid's game, it has been well received among serious board gaming groups - as an example, here's a review from Board Game Geek (which is THE site for board-game related information). (linked to review)

9 His link about a duck-based board game gave you a virus?  You mean you've been infected with...the bird flu?

11 I'm really sorry about the bad link... I got the URLs directly from Google, and talked with the website owners (real nice people) at the board game convention I was at last week.

I suspect their sysadmin-fu is significantly weaker than their boardgame-fu (which is mighty) and bad guys deposited crepe on their site.

12 Oh, BTW, did you notice the other duck-thing at 4:45?  (I know the Sadida Songstress before that was a little distracting.)