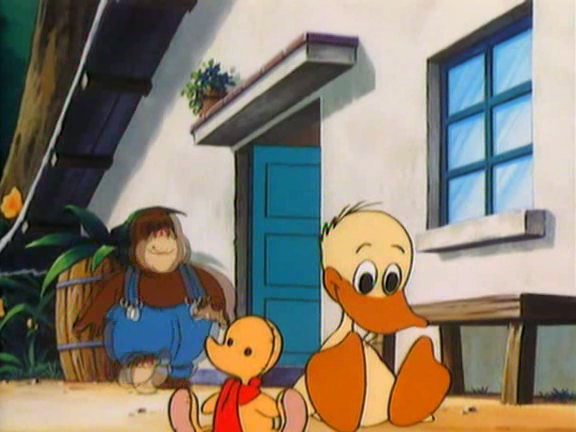 1 Is that really any different than a human child with a human doll?

2 Not at all!  In fact, that's exactly what I thought of to begin with.  It just seemed perfect, though, for a "Ducks in Anime" category post.

The Greatest Anime Ever. Sometimes when you're down and out, and life has you on the ropes, something wonderful comes along and makes you realize that the world is great and good.

This has occurred today.  Today, a fansub group released episode 1 of The Greatest Anime Ever.  Ladies and Gentlemen, for your entertainment, may I present... 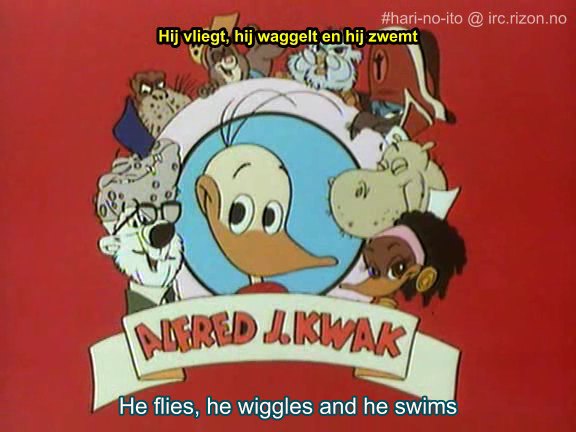 According to Wikipedia, for example, In episode 1, Alfred is hatched, and minutes later, evil land developers turn his home near a stream into a theme park.  Alfred's family is killed in a car accident in episode 2.  His opponent is named "Dolf", and is apparently based on Adolf Hitler (though we haven't met him yet).  The characters age over the course of the 52 episode run. 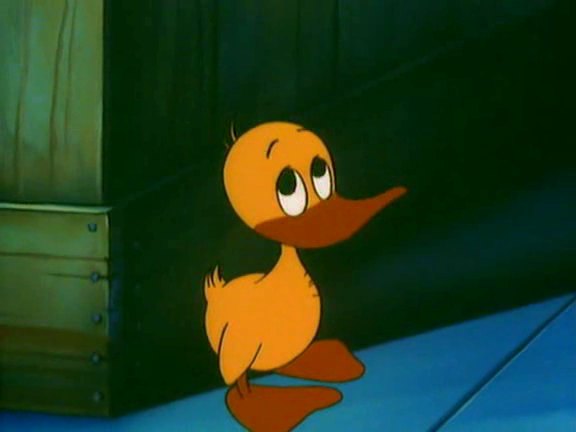 Our hero as a young man duck.
As you can tell from looking at the screenshots, this is an old show, starting in 1989.  It's not bad, for a children's show, all things considered.  The transfer to the OGM format is pretty poor, with any movement being blurry; that's probably an artifact of the original DVD source material.  Still shots look fine, if a little soft-focus. 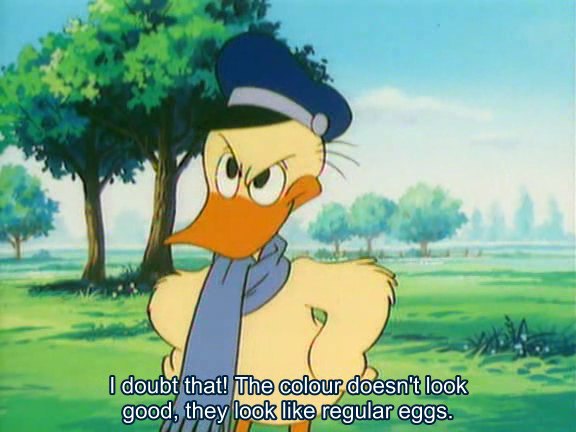 Our hero's father, taking umbrage at the slight on his family...

Truthfully, I'm sure I wouldn't've watched this if it didn't have a duck as the main character (and I didn't have broadband).  However, I'm glad I did... it's fun, and there's a lot of potential here.  ANN says it's a historical show, teaching children about life and such things as WWII.  If so, I can't wait.

One huge surprise, though, was the voice of Alfred.  The moment I heard the theme song, I thought "I know who that is," and a look at the cast list confirmed it: Megumi Hayashibara, performing in only her fifth or sixth show, and what might be her first lead (I can't tell if Ranma 1/2 debuted before or after).  It's a piece of anime history, and it's about ducks!  How cool is that???

And in this episode, Steven's worst nightmare comes true:
more...

2 Inverse telecine problem? Can happen, and it's evident when something pans. Devil to fix, usually we just said "hell with it, re-encode the whole ep" and went from there.

For all I know, Avatar, it's something more base than that... maybe it's left over from the original source material, and is actually on the DVDs.  Perhaps the masters were of low quality... no way to tell without talking to the fansub group.

What I think you're seeing is a function of trying to convert 24 fps film to 30 fps video. There are a number of approaches to that, but one that some people seem to like is to mix neighboring frames together.

When I did my review of Miyuki-chan in Wonderland I had a devil of a time finding clean frames I could grab as examples. The majority of the frames were mixtures of adjacent frames from the original 24 fps film, which is what they used to create up to the mid 1990's.

When the switch to digital began, they began from the back end. The first thing to be replaced was the light table and frame camera, and it meant they started mastering to 30 fps.

Older stuff doesn't always use that. Another digitization approach is field dithering. (Probably not the official term for it.) 30 frame per second interlaced video is 60 fields per second. Some frames from the 24 frame-per-second film are given two fields in the video and some are given three, in order to make the timing come out right. If the player is creating interlaced video, it doesn't have to do anything about that, but if it's producing non-interlaced video then it has to merge those together at display time when the two fields of any given video frame don't match.

But I bet that this show is using master-side frame merging, like Miyuki-chan did, rather than field dithering.

5 Steven, I'm going to bet that's exactly what's happening here.  I've gone through a few segments of the show frame-by-frame, and practically none of them are "single frames", if you get what I'm saying.

6 Cool.  I saw it on Animesuki a couple of hours ago, thought about downloading it, left that comment on Steven's blog, and finally ended up here.  I'll have to give it a try.