Ducks In Anime: The Grand Return Did you realize that it's been over a year since the last Ducks In Anime entry that featured an actual rubber duck?  It's time to fix that. 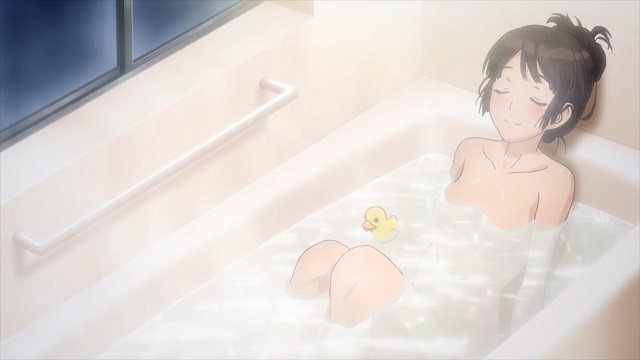 -Seiren, Ep01
Remember Amagami SS?  Essentially the first show to do an omnibus format,  with each girl getting four episodes, based on a PS2 dating sim?  Back in 2010?  No?  Yes?  Well, Seiren is essentially an indirect sequel to Amagami SS, taking place in the same world, in the same school as the older show.  In fact, one of the secondary characters is the younger brother of one of the girls from Amagami.  It looks like Seiren is going to be exactly the same type of series... and that's good, because Amagami was a secret jewel of a show.  If it's anywhere as good as the older series, this one is going to be a great time.

And hey, first episode rubber duck.  That counts for a LOT in my world.

1 I vaguely recall Amigami SS, and hey, since this season's looking a bit lean anyway I might give the kinda-sequel here a shot...

I know people are saying that, but I've got five (and maybe a sixth) shows on my platter this season.  Seiren, of course.  Interviews with Monster Girls, Little Witch Academia, KonoSuba2, and Kobayashi-san's Dragon Maid are the other four I've been anticipating.  And last night, Avatar insisted that I must watch Youjo Senki.

I did one show last season: Hib!Euph2.

3 WW1 meets Strike Witches, with pants. What's not to love?

I tried the first ep of Monster Girls today and quite liked it. Felt like Jitsu Wa with a bit less zany.

Tried Fuuka and Masamune-kun's Revenge, neither did much for me. Other than that, my list basically looks like Duck's, though I'll probably watch Fate/GO too.

4 Man, I totally forgot to look at what's coming up this season. I'm so used to waiting for people to post links to the roundups. It's kind like those specials the networks used to run previewing their saturday morning cartoons.

5 Av, I didn't count Fate Grand/Order since it's not a weekly thing.  But I did watch the first installment... Mash is cute as a freakin' button.

I did watch the first episode of Youjo Senji last night, and you ask what's not to love.  How about the main character?  I'm going to keep watching, but at the moment it's in the hopes that she gets run over by a fully-loaded  Überlandwagen.

6 It's not anime, but have you seen this church?  Clearly architected by a duck fan.

7 I have a high tolerance for jerk characters. I mean, I work in legal support, it's mandatory!

8 I got partway through Grand Order and bailed. Mash is cute, nearly everyone else is some level of creepy-and-or-annoying. And of course the lead is a K-drip. Also: as usual, it's another Fate-something installment where the gore factor's just a bit higher than I'm into. Sigh. I keep wanting to finish one of them to see how it turns out, but.