How Many Licks Does It Take To Get To The Center Of Ducks In Anime? 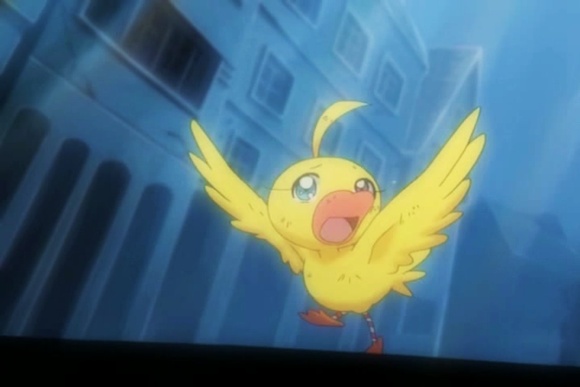 She's a girl duck named Ahiru... and she dances ballet.  And people think anime is just about giant robots and tentacles...

Screenshot taken from the AMV entitled "Hold Me Now", just a fun, fun vid, even if you don't speak German Swedish.

1 Have you gotten around to watching Princess Tutu? I thought you must have, given the whole duck thing, but a google check doesn't seem to answer my question one way or the other. It really is the neatest thing possible given the rather baleful possibilities of its peculiar combination of ballet, dance-fighting, and metafiction.

Mitch, I haven't.  No opportunity, I'm afraid.  The first time I tried to watch the series, I declared it "too frickin' weird for me" after one episode, and didn't bother to do anything else with it.

Now that I've become too frickin' weird m'self, I want to give it another shot.

I Like Big Ducks In Anime And I Cannot Lie... 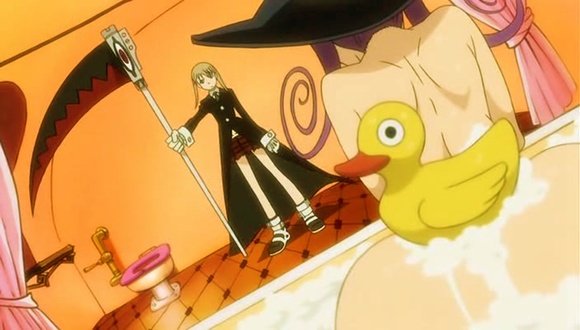 Surprisingly fun show, I must admit.  Just make sure you get the "Latenight Edition" or the "Uncut" version... or you'll miss out on half the fun.  I've been trying to figure out where I've seen this animation style before, though, and it's right on the tip of my tongue (ducks have tongues?).

Thanks to Don over at The Kawaii Menace for bringing my attention to this appearance of Ducks In Anime!

UPDATE: No sooner did I type that did the show with a similar animation style jump to mind... Re:Cutie Honey!  Maybe a little bit of Dead Leaves thrown in, too.

I TOLD you this series had potential but you kept disbelieving me.

Downloaded, but not watched yet.  I may have to fix that tonight.

Surprise echhi winner so far has been Maid Guy. Breasts have nipples?  Who'da thunk? (From the last two years of anime, anyhow.)

If this show has a sense of humor and fanservice, we could have a winner.

3 I've got Soul Eater ep02 waiting for me; I just need to get around to watching it.

Which isn't a sure thing... I still haven't watched the last two episodes of Clannad, for pete's (not Author Pete, just 'pete') sake.