Ducks In Anime: HidaSketch Hoshimittsu Is Over 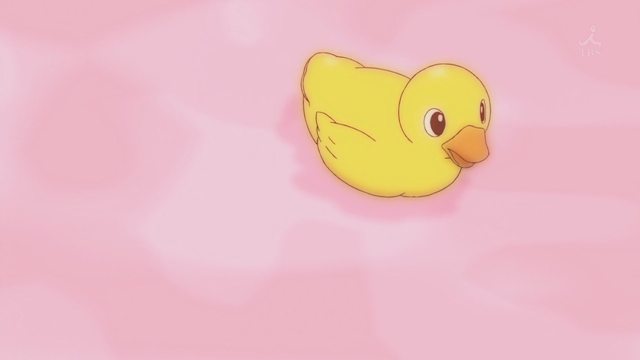 And so the most recent entry in the HidaSketch franchise has come to a close.  As with the earlier series, I'm sorry to see it end, but this time we saw a dud episode or two for once.  Not bad enough for me to avoid the next show, or to prevent me from buying it if/when it gets released, but there they were.

Of course the Core Four were still great fun to be around, and Nori-chan did grow on me nicely, but Nazuna never past a whimpering child with an inferiority complex big enough to choke a hippo.  I can't imagine her replacing, say, Hiro when she and Sae graduate, so it'll be interesting to see what happens when that occurs.

Other than the one or two episodes that turn the new girls into main characters, Nazuna more or less stays in the background, leaving the Core Four plus Nori to have the spotlight... fortunately!  Otherwise I'd be wondering why Ume Aoki hates us me.

On the other hand, Nori has proven to be the most sane of the series.  Down-to-earth, not as prone to flights of silly as the others, and more than willing to point out the others' weirdnesses, I almost wish that the series revolved around her.  It'd make the silly more silly, and probably better... every comedy team needs a straight man, after all.  Though her idea for tomato sherbet was a little... odd.

It's the ducks, though, that push HidaSketch from "good" to "great".  Gotta love 'em... Yuno certainly does.

While our soggy biscuit remained pretty much a soggy biscuit, I have to say that "dud" is relative.  A couple of episodes weren't quite as awesome as the rest, but I enjoyed every one of them.

It was nice to see the two earlier girls too - I wouldn't mind having them return now and then in future seasons (please, please!)

And ducks, of course, improve everything. 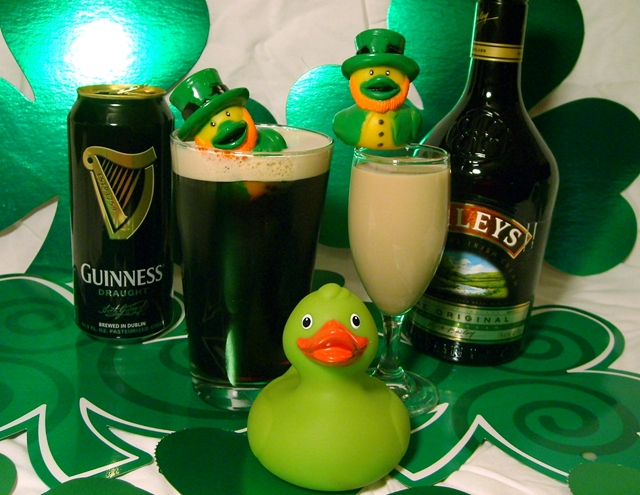 Sure'n a happy St Patrick's Day to you from all the wee duckies of The Pond!

Ducks In Anime: Yuno's One Of Us So in the newest episode of HidaSketch, Yuno gets locked out of her apartment and ends up spending five nights away, one night with each of the other residents of the complex.  When she finally gets back into her place and discovers that the place smells horrible due to a rancid pot of soup, she stays another night with Miyako.  But what does she grab from her apartment as it airs out?  Her duckie. 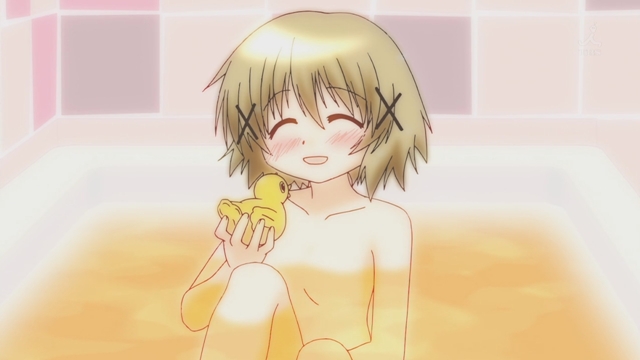 -Hidamari Sketch Hoshimittsu, ep10
And later that night, as she takes a bath in Miyako's tub, she apologizes to her duckie for leaving it alone in the dark for so long. 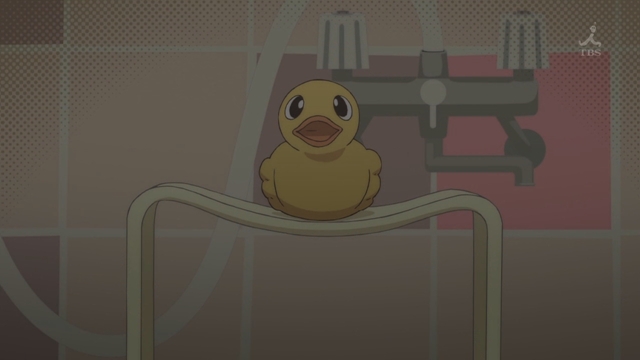 Of all of the duckie appearances in the HidaSketch franchise, and there are a ton of 'em, this is the one that convinces me that Yuno is, in fact, a duckie fan and not just someone who has a duckie in her bathroom.  Give her a few years and she'll be visiting duckplanet and rubbaducks.com too. 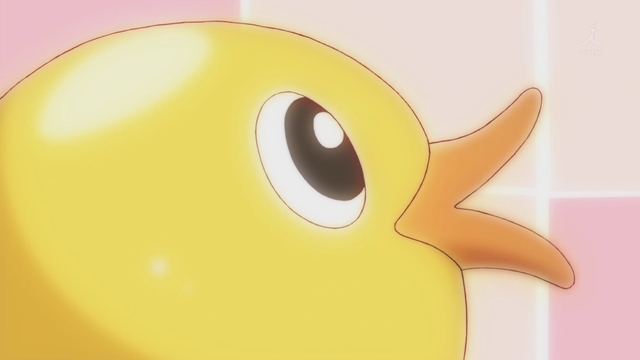 1 And that's why you have more than one (or two or five) ducks... so they're not alone in the dark!

2 I was going to prompt you to watch this ep - should have known you'd get there ahead of me. 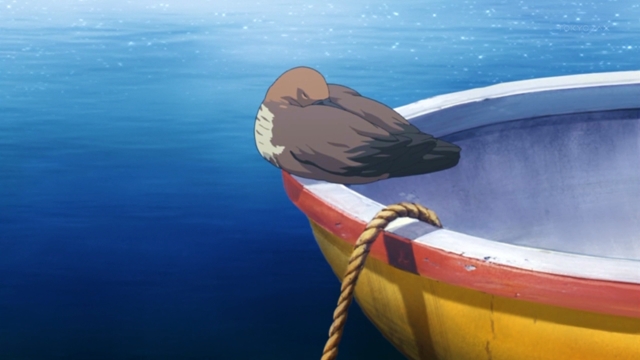 Oh, what the heck, let's make it a Twofer Tuesday! 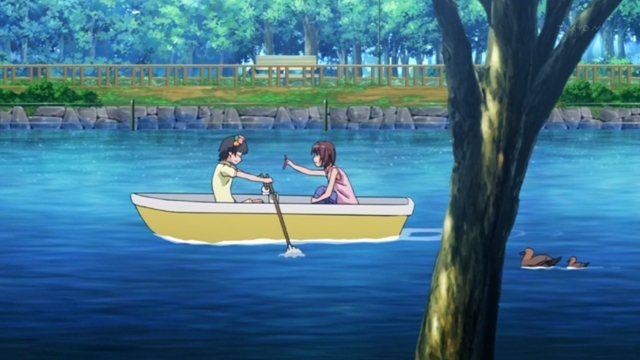 I don't think that first one is a duck. Ducks can't perch on an edge like that. Their feet can't hang on.

I think it's a pigeon.

Also, ducks aren't colored like that. They don't have light breasts.

3 Ducks can't perch on an edge like that. Their feet can't hang on.

Which is why there's no such thing as a "perching duck", right, Steven?  And pigeons don't sleep that way.  Ducks, however, do.

As far as coloration goes, the male mandarin duck has a white underbelly and breast.  While I can't find an exact match to the one above, I think it's pretty clearly a generic (real) female duck, done anime style.  Ducks Unlimited ain't gonna scream about it.

4 Japanese species often have unexpected colors, as I learned on the example of wagtail.

BTW, do you guys remember the duck in Binchou-tan?

5 I've seen pictures, though I've never seen the series.  It's pretty clearly a mallard, though.

Ducks In Anime By The Book

I hadn't watched ROD TV in a few years, but I really liked it the first time through.  I didn't feel like catching up on Railgun (I'm two episodes behind) or watching Summer Wars (not enough time), so I figured what the heck, why not?

And there it was.  I don't remember it being there the first time I watched the show, but with hardsubbing, it might have been covered up.  I'll freely admit to being amazed.

First episode is just as fun as I remember it being, too, so that's a bonus.

1 Did you ever watch the ROD OVA?  I really enjoyed it, but got turned off on the first episode of ROD TV when it turned out that there was more than one paper-master, and then Stephen's negative review convinced me it wasn't worth going back to it.

But if you like it, I may have to reconsider.  Does it feature any Pocky stix?

2 Not that I remember, but I didn't remember the duckie either, so take that as you will.  I humbly disagree with Stephen's review of the series, though his point is well-taken regarding the fridge logic involved.

Much like the OVA, if you watch it as you would, say, a James Bond movie, it's better than if you nitpick the hell out of it.  It's a fun romp... at least, as far as I remember.  It's been nearly five years since I last watched (sheesh, back then I was on dialup and using kazaa... it would take 18 hours to d/l an episode).

Hell, I don't even think I was blogging back then, and I sure wasn't doing the "Ducks In Anime" category.  Through the first two episodes, though, I'm still enjoying it.

The Greatest Ducks In Anime Moment Yet! Of course it comes courtesy of Hidamari Sketch... 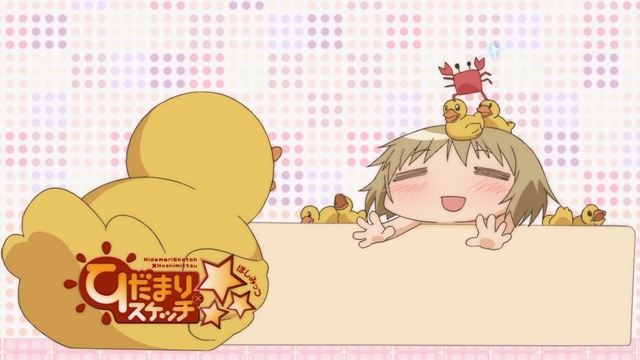 I swear, the staff of the show must be doing this just to make me happy.

I swear, the staff of the show must be doing this just to make me happy.

No. They're just drawing you in so that the Gainax ending will scar you all the more.