F1 Mega-Pr0n: Toro Rosso STR8, Caterham CT03, Marussia MR02 The last three of the new cars that we'll be seeing for a while came out today (well, Toro Rosso came out yesterday, details details), and instead of doing an individual post for each, I'm throwing them together into a F1 Mega-Pr0n! 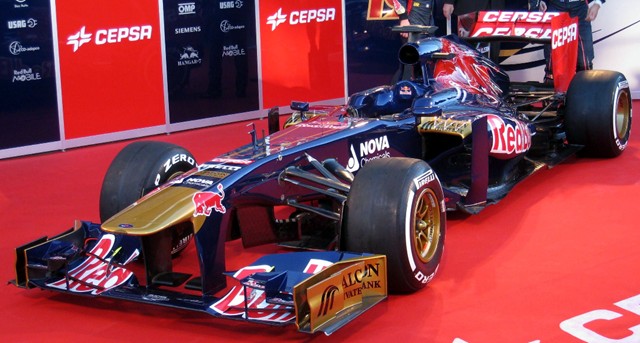 The Toro Rosso STR8 is probably going to be very very fast, but unable to turn worth a darn.  Last year's STR7 had seriously undercut sidepods; though it's hard to see here, the new chassis has done away with that.  This is going to allow the weight of the radiators to be set lower down, which should balance the added drag of the larger pod, which has a new triangular front opening.  As with all the other designs, the rear of the sidepods taper down quite steeply (aka "The Red Bull Style").  The team also redid the rear suspension design, allegedly allowing for more choices during setup.  I find the clear plastic vanes on the top of the sidepods to be endless fascinating... I can only assume that's being done to allow the sponsor's name to be read more easily.  All in all, a fairly conventional update over last year's design. 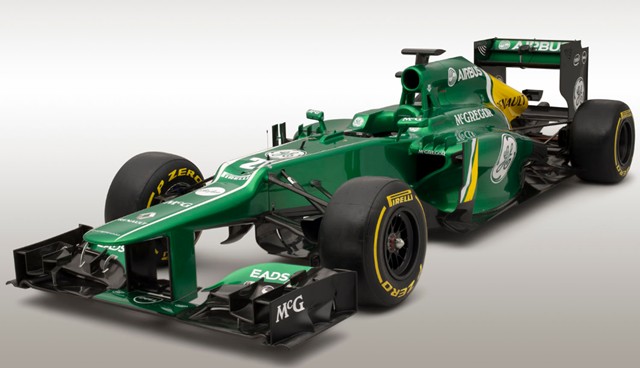 Unlike the STR8, the new Caterham CT03 DOES have majorly undercut sidepods, the Red Bull Style, and dear god in heaven they're not using the modesty panel.  Bless their hearts.  The big news here is that the bodywork at the back half of the car has been greatly redone, and apparently drew quite a bit of attention from the other teams in testing today... to the point where the tech regs are being hauled out to discover if it's all legal.  A nice metallic green paint tops off a great paint-job... shame the rest of the car is so ugly!  Put a panel over that thing, please! 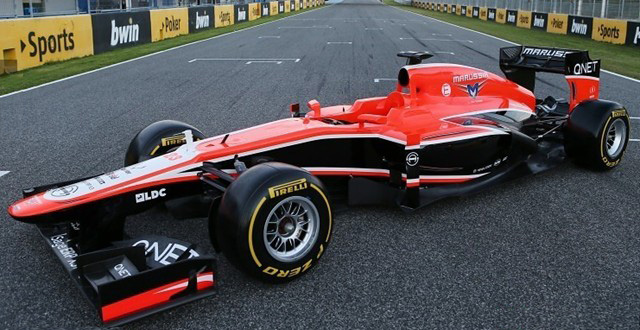 When Marussia was known as Virgin Racing, their first car was designed and tested entirely in computers, no wind-tunnel testing or anything like that.  The car tanked.  Last year, the MR01 managed to beat HRT while also being totally designed using Computational Fluid Dynamics.  Yay.  Now here, the MR02 comes out and good merciful heavens, it's gorgeous.  Perhaps not so coincidentally, it's spent significant time in the wind tunnel.  It's also the first design this season to have a nicely curved airbox; everybody else has straight lines and sharp angles.  Lotus and McLaren have a rounded-ish airbox cover, but nothing like this.  It's a beautiful car... mainly because there are practically no sponsor stickers on it.  That's a bad sign,but we can appreciate the look until they go broke.  If they do.  The main change to this car is the addition of KERS, which of course isn't going to be externally visible.  See, Caterham, it's not that hard to make the car look good!

So there we go!  The only car left to debut is the Williams, scheduled for February 19th at the second test session.  We'll keep an eye on testing in case anything interesting happens... F1 is right around the corner, folks!