F1 Pr0n: Lotus E22 As the second of the pre-season test sessions begin in Bahrain today, we've finally gotten a real look at the last of 2014's challengers for the F1 Championships.  Team Lotus looked to make the move to serious, legitimate contender for the big prizes, but rumors of financial difficulties that turned to truths placed the end of their 2013 season under a dark, dark cloud.  Meanwhile, missing the first pre-season test in Spain earlier in the year did nothing to dispel said clouds.  Still, it's hardly the first time a team hasn't shown up to a test session... and they made it today.  So let's see what they'll be throwing at us with the E22!

Well.  Pretty conventional, I'd say.  Pretty much like the other cars as far as side profile goes, though it does appear that there's an extra exhaust pipe or something like that just aft of the word "clear" on the back of the car.  Nose works pretty well from this angle, too.

I... what?  Seriously, Lotus?   See, when you guys released those renders of the car something like six weeks ago, I assumed that it was some joke or something.  It appears that my assumption was misplaced... you really did mount a walrus to your nose. 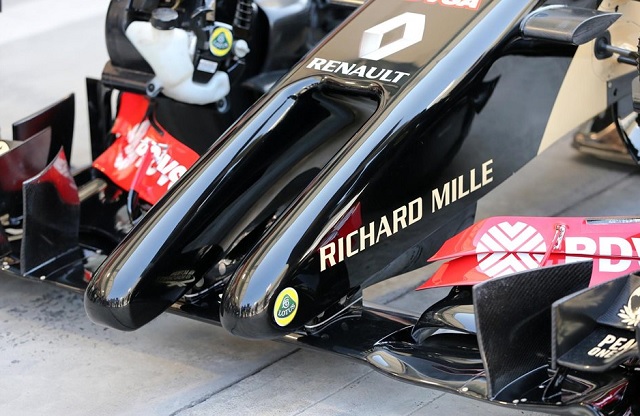 So here's the gig.  The rules say there has to be a single nose tip of a certain cross-section and a very low height.  To make this happen, Lotus took one of the tusks and made it longer than the other.  This satisfied the regs for a "single nose tip," while letting the team do other stuff... stuff like having a clear  unobstructed airway down the center of the car, for example.  There are some drawbacks to this, though: the mounting points for the wing are somewhat larger, for example, than the other teams'.  Twice as many noses means twice as many airflow obstructions.  Of course, all of these things are occurring right where it's best for them to happen so it might be a wash... or a net gain.  We don't know yet.

Durn clever, though, and no mistake about it.  It'll be even cleverer if it works.