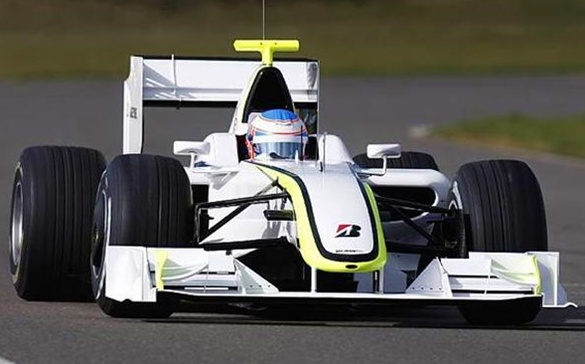 Hello, world...
Well, that's it.  That's the only picture that's been released of the new BGP001, in this case being driven by Jenson Button.  Just noticed that the front wing mounting to the nose is completely different from everybody else's... curious.  I might have to do a post on that, compare and contrast for each team...

I rather like the plain white-with-neon-yellow livery, but there's not a chance in Hades it's gonna stay that way, not if the team wants to last more than one race.

I find your post confusing in a couple of ways. For one thing, to my uneducated eye, the front fin mounting looks exactly the same, and I don't get the sense that you're being snide.

For another, I can't figure out why the team's longevity would be a function of the paint color.

2 1. Everyone else opts for a high nose this season.

2. WD is talking about sponsor logos. The basic livery is already approved by FIA, it's said.

3 Regarding the livery, Pete's right, though when I made the post, I didn't realize that what we were looking at was the race livery.  I assumed it was their testing colors, much like McLaren's classic "Gulf Orange" preseason paintjob in 2006.

Further reading has revealed that the team is, apparently, going to run exactly as we see it above: no sponsor logos other than the F1-mandated ones.

Regarding the front-wing mounting, there's a post coming.  Turns out there's quite a wide range out there.

4 BTW, they are racing without logos because original Honda didn't have them (due to the enviro livery), and finding new sponsors takes time and effort. But the management was busy rescuing the team. Brawn said yesterday that they will seek sponsors, but didn't set any targets when it's going to happen.