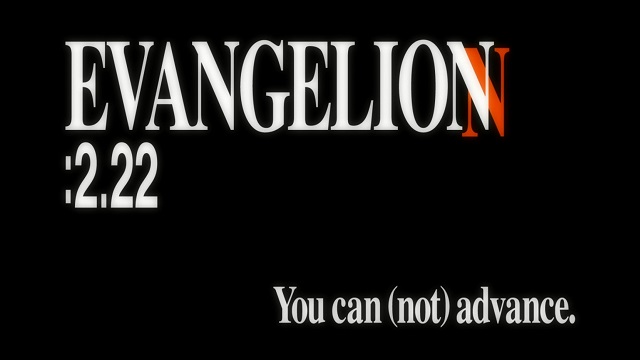 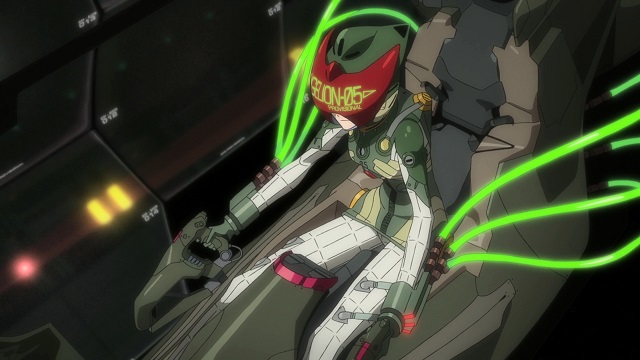 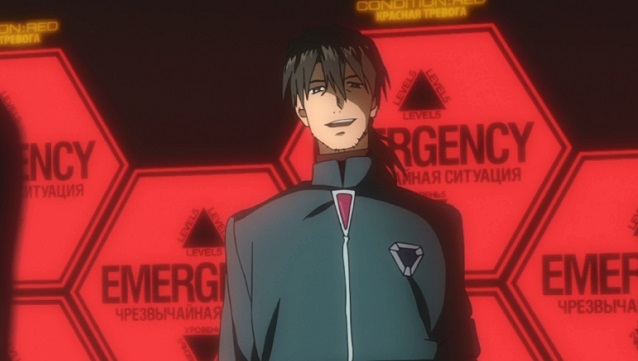 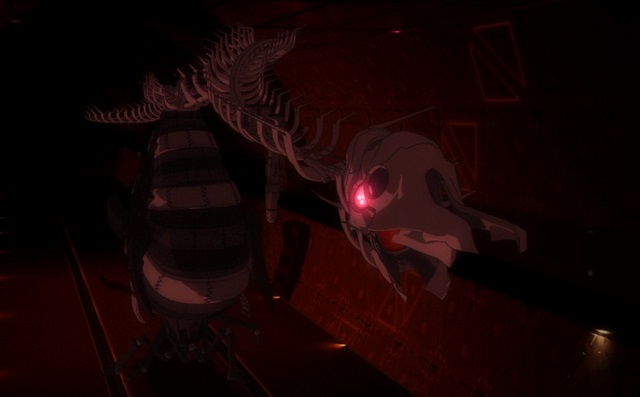 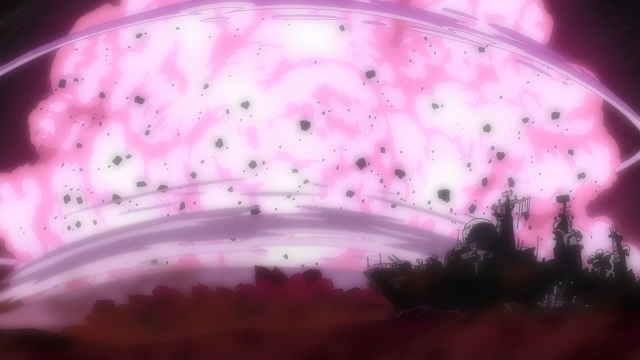 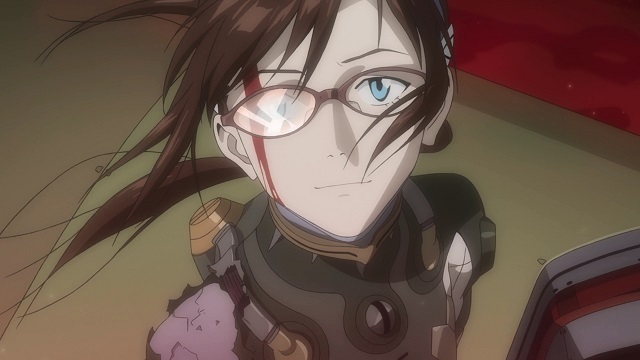 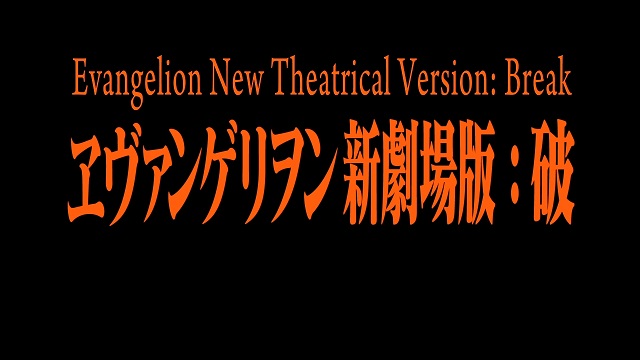 
Back?  Good show.  I hope you're prepared, because it's happyfuntime!

Welcome to ImpactLand, the most cheerful place in the world!  It's the memorial cemetery for the victims of the Second Impact... each one of those rods represents one person, and has a name on it to boot.  Good record-keeping, I guess. 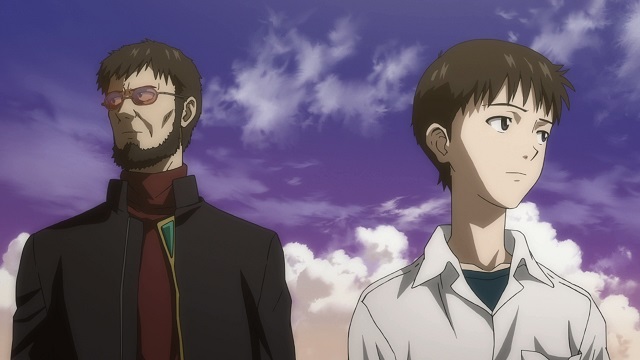 Gendo Plushyferret and Shinji Whinybitch are there, visiting the marker of Yui, wife and mother respectively.  To say that the conversation between the two is strained would be something of an understatement, kind of like saying that the Horologium Supercluster is fairly large.  Plushyferret flies off, Shinji gets into Misato's car and they drive away.  Moments later, they're nearly crushed by the remains of a destroyer being deposited on the highway.  Wha? 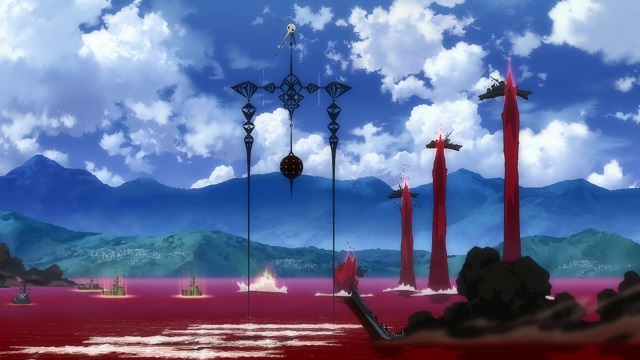 Oh.  Of course, it's another Angel, and both Shinji and Teh Rei (on board Gendo's helicopter thingy) are out of position.  The world is doomed... DOOMED, I tell you!  I'm noticing that Angels seem to have something against naval vessels.  Actually, the Alones from Vividred Operation, that cheap knockoff of Evangelion, just with magical girls, didn't like ships either.  Makes me wonder, was the Production Staff scared by a destroyer when they were kids?  "Mommy, that mean frigate pushed me at school today!"  Do not worry, doomed ships, you will be avenged!  Speaking of avengers... 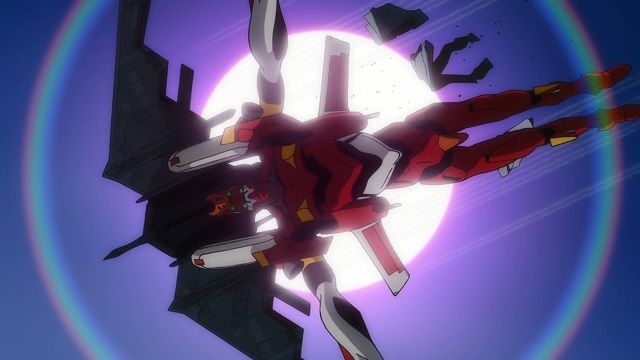 Oh, it's good to be back!  Eva-02 drops out of a plane, plummets towards the Angel, dodges everything thrown its way, and then... 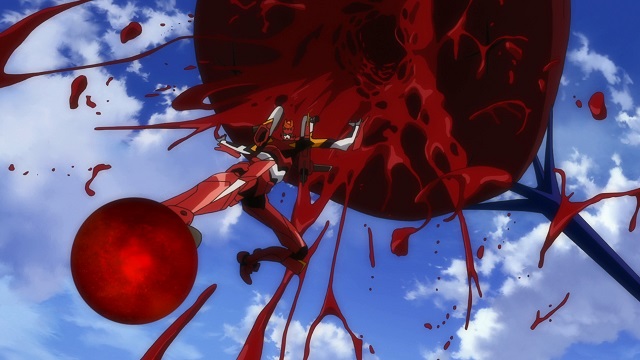 *splut!*  Then *kaboom* and another big 'splody cross.  And who is our new Eva pilot? 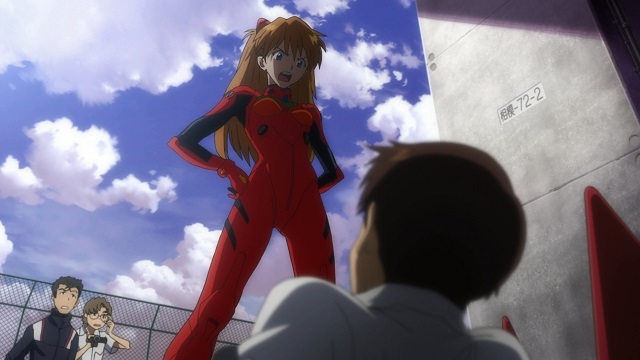 Captain Asuka Langley Shikinami introduces herself to the cast by insulting Teh Rei, taunting the two hangers-on in back, sucking up to Misato, then Cobra-Kai'g Shinji to the ground and accusing him of only being an Eva pilot because his father is Gendo Plushyferret.  Well, she's not wrong about that.  I'm wondering... does sweeping the leg and dumping him to the ground count as punching Shinji in the face?  These are the important questions that come up in the writing of one of these posts.  A half-day later, Shinji returns home to the apartment he shares with Misato only to discover... 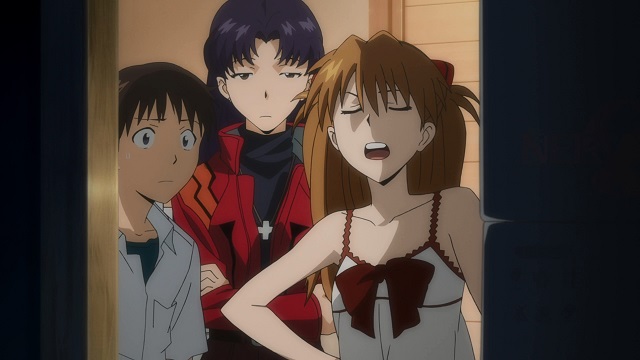 ...that Asuka has moved in, taken his room, and that she believes he's going to be kicked out.  As it turns out, she is wrong... on so many levels.  Misato tells them both that they need to work on their communication (and interpersonal!) skills... and it's an order.  Meanwhile, in the urban renewal sector of Tokyo-3... 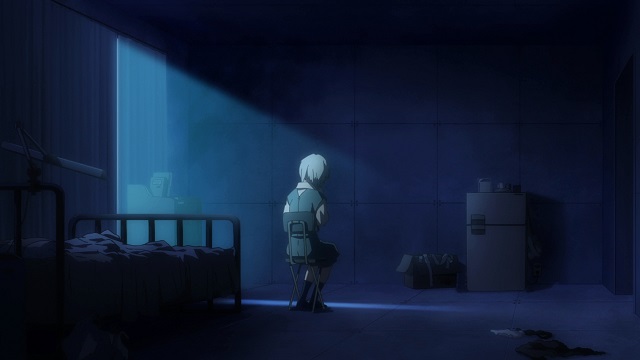 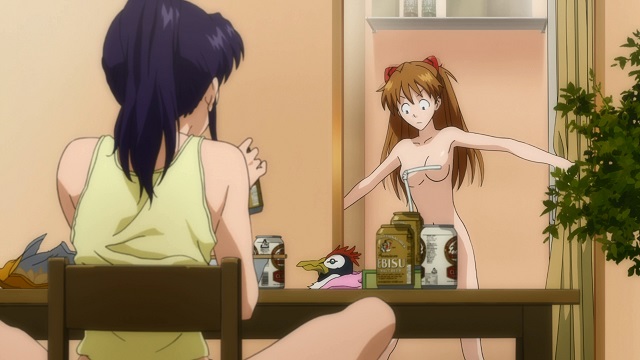 ...Pen-Pen's got da moves and da chix0rs.  Probably gots the noize and da funk, too.  He's just that sort of penguin.  Pen-Pen's da man.  Or... um... bird.  Whatever.  Whatever he is, he's that with a side order of bacon... not crunchy, either.  Later that night, after jump-kicking Shinji in the face... 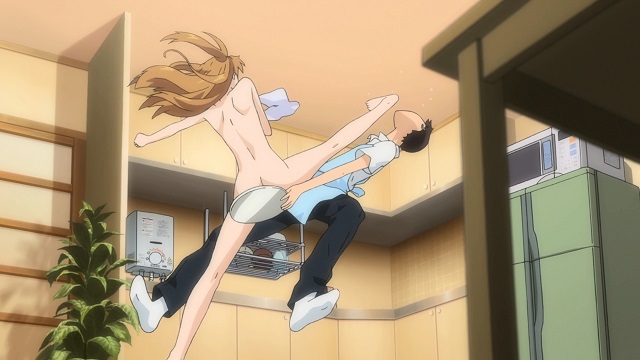 ...see?  She must truly love the guy already.  Anyway, later that night, we discover that Asuka's crazier than a bagful of alpacas.  Oh, I'm sure there's plenty of logical reasons why she has an scary hand-puppet labeled "Asuka"... 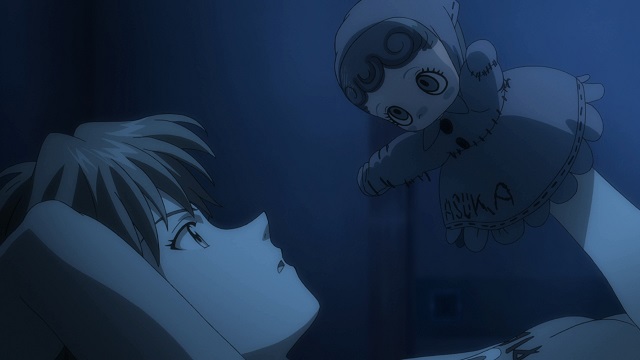 ...that she talks to, but I'll be durned if I can figure out what they'd be.  Seems a lot more likely that she's a might tetched in the haid.  In other words, she's exactly like everybody else in this movie: a wackadoodle.  Speaking of wackadoodles, we haven't seen much of Gendo Plushyferret since the beginning of the movie... wonder where he's hangin' out?  No?  Well, I can't says that I blames ya, but since I had to watch this darn thing, you're gonna find out anyway. 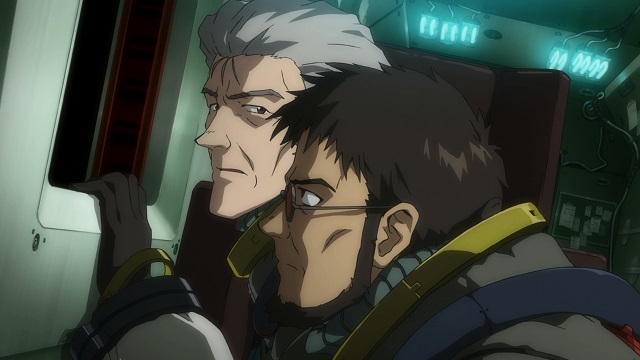 Yep, it's a strip joint, one of those places that you put a coin in the machine, and the window opens for a minute or so, you know the ones.  As you can guess, Gendo and his henchman have just put a coin in.  No, no, no, that's not what's going on here... mostly.  Nope, they're in a spaceship.  No, I'm not kidding.  In fact, they're visiting "Tagbah Base", set on the Moon... and what's so important up there? 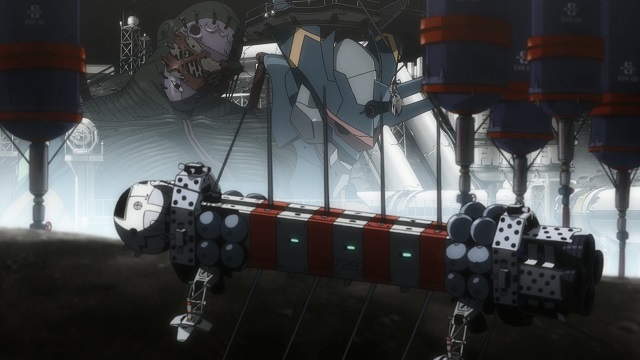 SEELE, the shadowy organization that's quasi-in-charge of NERV but not really, is putting together another Eva... and it's being done in ways not seen before.  At this point, I'd like to point out a certain resemblance between the spaceship and the one from that hideous British/Italian joint venture, Space: 1999.  Except the plot of Evangelion is more realistic.  For example: 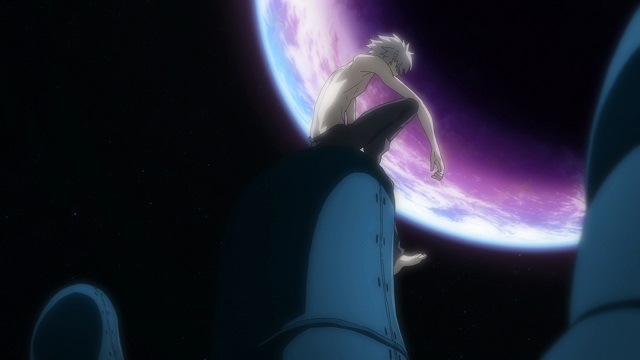 ...there's someone sitting on the Eva's fingertip.  Without a spacesuit.  On the Moon.  At least, I hope that's a fingertip.  We don't know who he is, but he turns to the spaceship containing Plushyferret and says "Nice to meet you, Father."  Plushyferret, you sly dog, you!  No wonder you don't like Shinji... I'm willing to bet that he can't sit in the cold vacuum of space without his blood boiling, his eyes frosting over, and his lungs collapsing.  Though I'd be happy to see him try.

Anyway, this seems to be a good place to draw a veil over the proceedings and bring an end to this first installment of the Second Eva Movie.  Tune in again next time: more zombies!