Rio Rainbow Gate! ep14 After I escaped from the clutches of Rio Rainbow Gate! episode 13, I thought I was quit of the whole thing.  After all, the series was over... it was done, and though they left a small window open for a second series, nobody in their right mind would ever authorize a sequel, right?  Right.  At least, that's what I keep telling myself... it helps me sleep at night.  Then in Japan, they began to release the DVDs and BDs and my heart sank.  There were to be seven discs, with two episodes per disc... but there were only thirteen episodes released.  That meant there was going to be an extra episode made... and I was going to have to return to my worst nightmare.  There was still hope, though: no fansub groups seemed to be interested in doing the BD releases.  When the release date came and went for the final disc with no sign of Ep14, I rejoiced.  Maybe it wouldn't have to happen after all!  But as time went on, I began to... worry.  I became nervous.  I jumped in my seat a little bit every time I saw the letter "R" on a torrent file at the usual sites.  I stopped eating.  My hair began to fall out.  My eyebrows grew at a furious rate.  A visit to the doctor returned the expected diagnosis: I was suffering from excessive stress.  Since everything else in my life was going more or less as normal, it was obvious what was causing my problems... the tension involved with the non-release of the bonus episode was at fault.  Days and weeks stretched to months.  Time seemed to slow down, every minute feeling like an hour.  A gray pall fell over the world, though to be fair that was because I neglected to clean my glasses.  I began to haunt the three fansub groups that had broken down and released some BD subs, alternately anticipating the notification that they'd completed the extra episode and hoping that they hadn't.  Sleep became difficult to achieve.  What remained of my hair turned white.  I realized that the lack of RRG! was killing me even more effectively than its presence would.  When the episode finally came out, the release of the tension caused me to pass out.  I awoke hours later with the notification that the download had completed shining on my computer monitor.  With trembling fingers, I double-clicked the file and settled back into my computer chair, and much to my surprise, I smiled... and at that moment, I realized something important.  This is my destiny, my fate.  I must do this, just as a lemming must execute a forward triple-somersault with a twist from the pike position off a cliff in Norway. 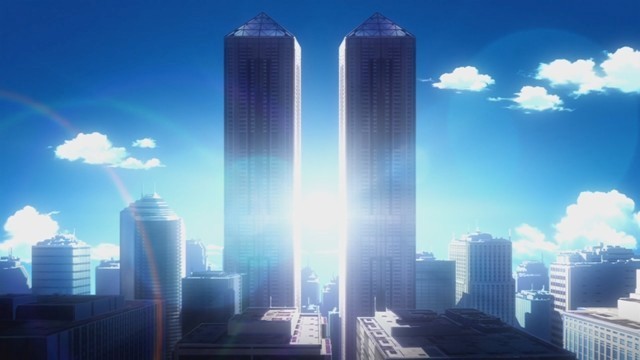 The city of Townsville!  Casino Island, how I've missed you with your towering skyscrapers that we never really saw in the original thirteen episodes.  It's good to be back... it's like coming home and finding a fresh cup of hot chocolate waiting for you in the kitchen.  Until you realize that you live alone and you have no idea how the hot chocolate was made, until you see the burglar come out of the connecting hallway with a bag full of your stuff over his arm.  Yeah, it's exactly like that. 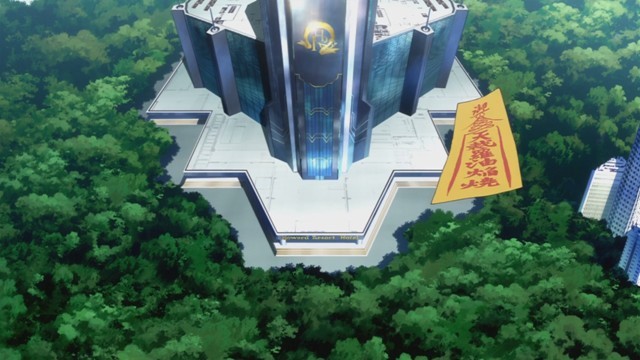 A brisk morning ocean breeze blows over the Island, wafting a discarded eggroll wrapper towards the Casino that gave the island its name... and didn't the casino rise directly over the water before?  Ah, Rio Rainbow Gate! Production Staff , it's been much too long.  I've missed your lack of attention to detail, much like I miss a painfully decayed tooth that's been pulled out of my head by wrapping a string around it and attaching the other end to the back of a Top Fuel dragster.  Yeah, it's exactly like that. 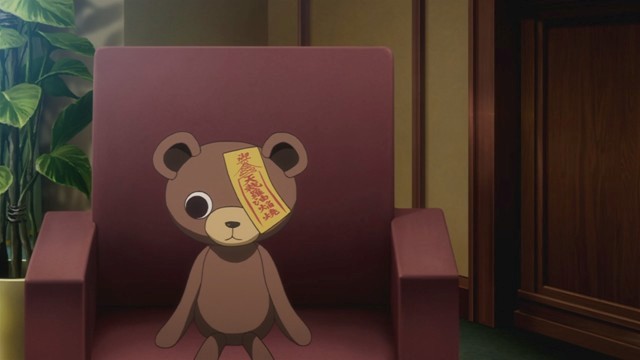 Actually, the discarded eggroll wrapper was last seen in Ep11.  For those who don't remember, and how I wish I could be counted amongst your number, that's the episode that saw The Usual Suspects attempt to break Evil Cartia's grip on the "stolen" Casino Island by gambling and winning away all her fortune.  Realizing that this was only a minor challenge, she called for "Ten," a young girl who had the power to control anything, as long as it was made in China.  In that episode, she turned Mint's bear, Chocco, into a real girl named An-An.  I don't believe I just typed that from memory. 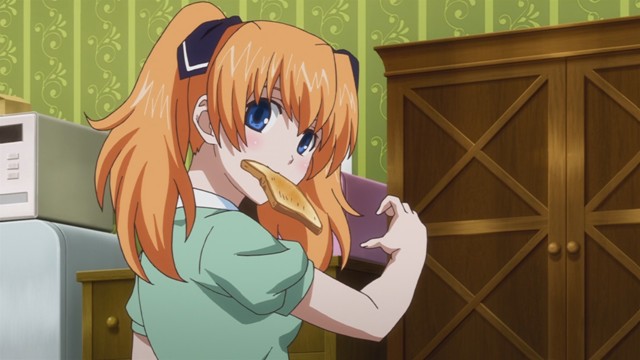 Meanwhile in the slums of Casino Island, a terribly late-running Anya makes a vow: to get out of this horrible show as soon as she can, maybe land in a Noitamina production... heck, she'd sign up for a guest appearance in Ben-To right now, that's much better than being in this mess to go an entire day without tripping over her own feet.  While for you or me this might not seem like so much of a much, for our Russian dealer this is akin to saying "I'm not going to breathe at all today."  That's right: impossible.  I'm sure our favorite Production Staff won't disappoint.  Unfortunately, they're not working on this show, we're stuck with the ones for Rio Rainbow Gate!.  After a brief glimpse of all the Usual Suspects as they get ready to greet the day, we're off to the races.