Ben-To! Ep07 Ha-ha!  I bet you didn't expect to see another one of these for a couple of weeks at the earliest, and maybe not for months and months.  Well, you were wrong, weren't you?  It's okay, it's totally understandable; it's not like I've had a great track record when it's come to the episodic writeups for Ben-To!.  I admit that.  Not only do I admit it, I embrace it.  I cherish it.  I make it my own.  And then I crumple it up into a small little ball and throw it away, because this here, this now, this is the way things'll be done around here when it comes to our little show about food fights!  If you smell what the Rock is cookin' Because Stone Cold said so Whatcha gonna do when Duckamania Dead man walkin' Vanilla midgets Y2J Rabid Wolverine Will somebody stop the damn match And besides, this episode is supposed to take place in a waterpark, and forgive me, but I just don't see any way that that can be bad.  I don't.  I really, really don't.  Which probably means I haven't been reading my own writeups, but let's just go with it for now... I Am The Game.  Welcome to Ben-to Ep07 is Jericho!  Bang bang! 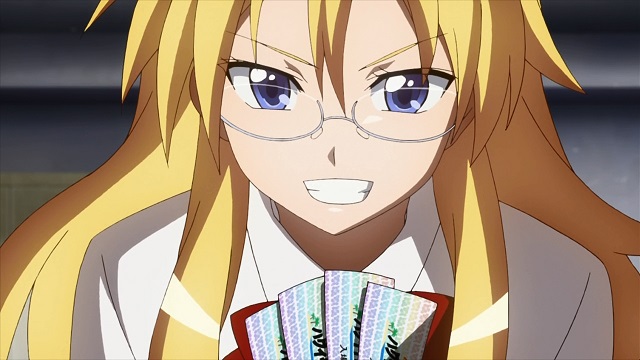 As the episode begins, Shaga shows up with four tickets to "Totally Hawaii", the newly opened theme park.  Seems the conglomerate that runs Ralph Store ("...we do more than just Ralph!") runs the place and gave their employees free tickets.  Macchan gave her tickets to Shaga, and since she no longer has any friends from The East, decided to offer them to Our Hero and the rest of the Half-Pricers Association.  Our Hero, in a feat of mental ingenuity unsurpassed since man first put cheese on a hamburger, realizes this means swimsuits... particularly for the Ice Witch. 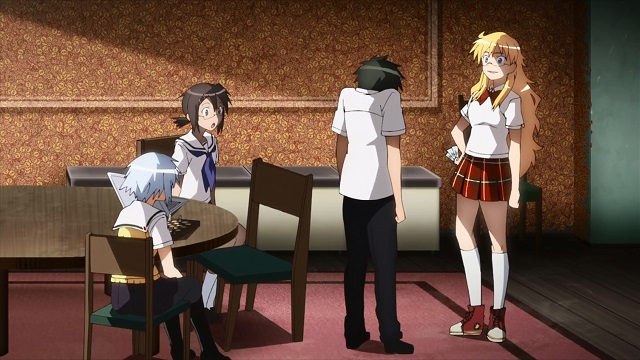 Needless to say, he is enthusiastic about this idea, and truth be told, it's kinda hard to blame him.  I was enthusiastic about it when I first heard about it myself, and yes, I know that sounds rather lame of me.  Yup, perhaps so, but then again, I also spend multiple hours typing episodic writeups for an anime about martial artists kicking each other nigh unto death for Happy Meals.  Of course I'm going to be enthusiastic about a swimsuit episode!  And since we're amongst friends here, you can freely admit the fact that you are too.  Because you know the animation quality of the swimming scenes is going to be top-notch, and we're all here because of the animation quality of Ben-To.

1 Mmmm, that is a nice one piece, but you had to mention sleeveless turtlenecks....

Black ones especially. Maybe worn over a white skirt, and boots.

2 I tried loco moco (haven't seen it with any meat but a hamburger patty, which lends me to believe that's the normal way of eating it here - because believe you me, if someone was going to replace it with spam, they would do that here.) It's... I have mixed feelings about it. It's not -bad-, by any means. It's just kind of... it never really comes together, y'know? I'm not convinced that the rice, gravy, egg, and meat taste better as part of one dish than they would separately.

That said, any place that has loco moco will also have chicken katsu, or failing that, kimchi fried rice. Mmmm. L&L's katsu gives you like a pound of chicken in there, it's a little scary. Also, two scoops rice and one scoop mac, it's the land of the carbo load.

3 I have to admit, I was expecting dramatic chipmunk.

4 How did you make this post move above one (F1 Quals) which was entered later?

6 I didn't know we had that ability.

7 ...the entire series is like a Ranma 1/2 gag stretched out to a bunch of episodes, isn't it? "Martial Arts Ramen Delivery" and "Martial Arts Ice Sculpting" and so forth.

(Oddly enough, during my last visit to one of our better Hawaiian places in town I had the Loco Moco just to be different. I concur with Avatar: It's certainly not bad, but it's never better than the sum of its parts. *shrug*)

8 Re: the head tilt - it's possible because she's apparently tilting her shoulder up, thus less strain to the muscles.

I remember being skinny as a rail and a lot more flexible. It was just a long time ago.

Ben-To! Ep06 They say that just claiming to have decided to continue on with a series that you dropped isn't enough: you have to back it up with action.  Well, I did that to a certain extent with the writeup for Ep05, but one episode does not a restart make!  Nope, it's gotta be at least two before you can take my claims seriously.  And this, my good and dear, is the writeup for Ep06... or will be, when it's done.  I mean, yeah, right now this is just the usual opening paragraph that usually has absolutely nothing to do with the writeup itself... it's more a chance for me to warm up.  And by "warm up," I mean in the sense that a pitcher has to warm up before he comes into a game.  Sometimes, I'm like the closer: jogging in from the bullpen with the crowd going crazy and a high-octane theme song blaring, with a rubber arm that needs but a few moments to get loose.  And then there are the days where I'm the fleabitten, mangy old pitcher who needs an hour to get loose and only throws slop, junk and trash, all of it at 82 mph.  But in the end, somebody has to get the outs, no matter how hot or bad the arm is.  Good rule of thumb would be the longer this first paragraph is, the closer I am to being Jamie Moyer than Masahiro Tanaka.  Well, either way, I'm in the major leagues.  Which might be more than I can say about Ben-To!, but perhaps I'm being unkind.

The preceding warmup paragraph was written just about two months earlier.  Much has changed in that time, to say the least.  Yankees pitcher Masahiro Tanaka tore a ligament in his pitching elbow, went on the disabled list, and realistically shouldn't be expected to return this season.  Jamie Moyer is still old.  Your scribe was put on waivers, then released.  Funmation postponed the release of Ben-To! indefinitely.  Heck, even the original viddy I selected for Trevor Hoffman went away.  So yes, much has occurred... and yet, Ben-To! is still in the exact same place it was when we last saw it, just aching for us to return.  And so we shall! 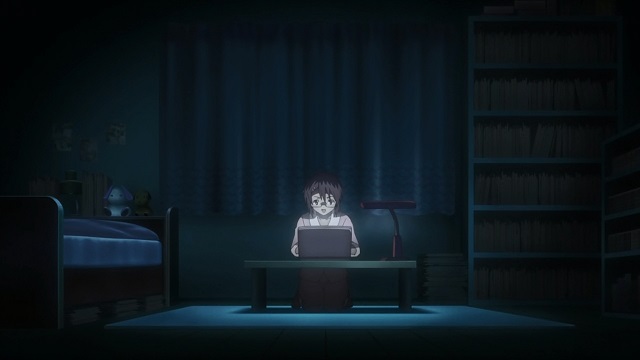 Surprisingly, this is kinda similar to the way I blog.  Except I sit at a desk, use a tower computer, have an incandescent lamp above and to my right, and red accent lighting for the rest of the living room (not bedroom), and I'm a duck.  Desaturation Lass up there is taking the events of Ep05 and making them into one of her yaoi fanfics, and that's just about all the lead-in we get this episode.  It's actually rather disturbing.  Not the lack of lead-in, her writing.  I mean, very disturbing. 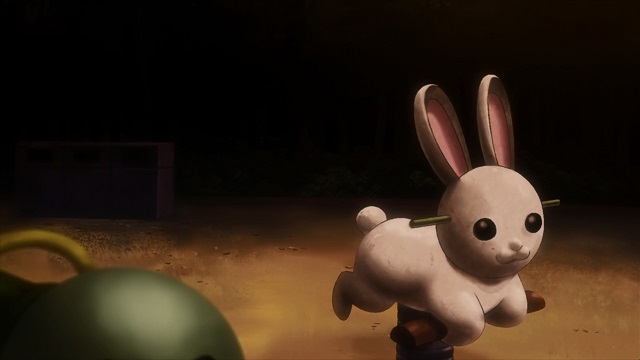 1 That is one hell of a stitch job, sir.

So everyone in this show is as nutty as all get-out, and nothing ever has to make sense, is what I'm getting from all this?

2 Martial artists in duels to the pain over day-old prepackaged meals, GD.  That right there should give you an idea of what we're up against.

3 I had, in fact, managed not to take the premise into account when commenting. The error in my ways is duly noted.

Great eyecatch on this one, though.

4 Nice stitch.  I know some Anime seem to have a permanent vignetted border around them that can make a stitch impossible.

MPC doesn't have that limitation on screenshots, so that's what I use.  I haven't been doing as many screenshots lately... it's a lot of work so you have to know if it's being appreciated.

5 I automatically assume it's appreciated.  If I didn't, I'd be doing a half-arsed job on my writeups, because my writeups have screenshots.

I've already screwed up everything else I can think of, I'm not letting my writeups go down too.

6 So... you don't think the Ralph Store was purposefully surrounded by a Dark Aura of Evil?

Oh, wait, that has to be purple and pulsing, doesn't it?

Also, you didn't mess up your job, unless you think guys stuck in Benghazi without backup also messed up. You worked harder than anybody could expect, and maintained loyalty to a company that wasn't loyal back.

Eat some eggs. They have good nutrients for building you back up after extreme stress, and they have a nice steady glycemic level. Oatmeal is another good food for this.

7 Point taken.  Although wanting to do it right has totally stalled out a few posts that have been in draft stage for ages.  Just too much work at work.  Pesky day jobs.

Yeah.  Tell me about it.

9 Sorry. I wasn't thinking about that.