Gakkou Gurashi Ep04 and Ep05 Two episodes at once?  I can hear you, my assembled readers, asking in unison if I'm insane, if I've lost my mind, if I have, in fact, gone 'round the bend.  To which I respond with "well, duh."  There is, however, a method to my madness.  I have done two episodes at once before, but they were "nutshelled", or brief recaps of episodes that were pointless or annoying or both.  Not this time!  In a fair and just world, these two episodes of Gakkou Gurashi would have either been aired back-to-back or as one hour-long episode.  Well, this isn't a fair and just world, obviously.  Obviously, The Pond is not fair and just either, but I can at least try to improve this little corner of the planet by doing this.  I'll fail, of course... improving the planet is not accomplished by blogging about anime... but the effort will have been made.  That's gotta count for something, right?  Now, before we get started, allow me to repeat myself.  I'm blogging about the anime, not the manga.  I'm not interested in knowing how things are done or aren't done in the manga, nor in what's coming up in the show.  I'm watching it as I blog, so I'm literally no farther than Ep05.  So if I say something that is proven false in a later episode, I don't want to know about it.  All of this is a lot of words to say No Spoilers.  Please don't make me be grumpy at you.  You don't know what I'm capable of.  Okay, now that we've gotten that out of the way... as you may remember, Ep03 was mostly flashback to that day.  We don't find out how they get off the roof, but I guess that's okay!  What will we learn about today? 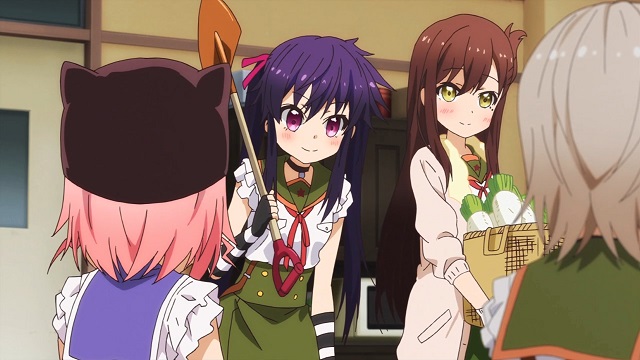 Yuki is hand-drawing a graduation album... after all, it's soon to be that time of year for them... and Miki is helping, in exchange for Yuki actually doing her chores.  Yuri and Kurumi were apparently gardening, look at those daikons... and no, that's not a euphemism for anything.  I'm amused that while I meant to type "euphemism", my fingers actually generated "euphonium".  I also badly mangled "euphemism" to the point that spellcheck couldn't quite figure out what I was trying to say.  Sometimes I wonder about myself.  Anyway, Yuki is a lousy artist, go figure, and everybody makes fun of her for it, also go figure. 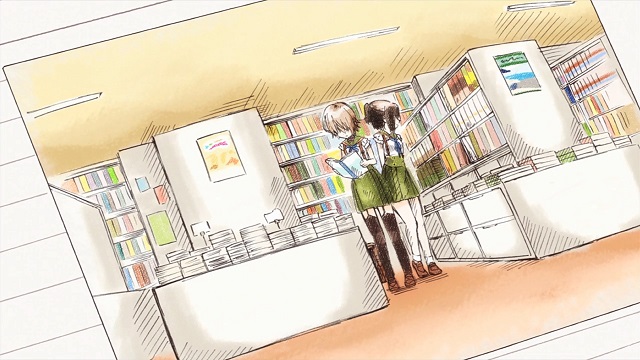 Miki, on the other hand, is quite good... to the point where the others are wondering who the girl is with her in the picture.  "She was a... close friend," she says with a sad look as we fade into another flashback.  Lots of those in this show, huh?

1 Great post, though it took two hours to get through because I had to stop down for an hour and a half to watch a Hitchcock film partway through...

But seriously this show seems to be made of pure WTF-sauce. I'm glad you're doing these recaps. There's no way I'd be able to actually watch. Too many zombies.

2 Ok, so the teacher must be dead.  So I'm guessing she must be a product of Yuki's imagination as well.

3 "So I'm guessing she must be a product of Yuki's imagination as well."
Ask yourself this, Ben:   if she's imaginary, then how did she have a car?

4 Rick C, I didn't mean she's entirely imaginary, I meant her current presence in the story (as far as I can follow from reading write-ups and commentary) is in Yuki's mind only.  I.e. she's dead, but Yuki is *pretending* the teacher is still alive.  She just edits out inconvenient details, like the fact that the teacher isn't driving her own car, out of her daily narrative.

Either that or Yuki can see ghosts.  I guess that's possible, too.

6 Guys, I think you're treading awfully close to spoilery territory.