Vividred Operation Ep06 Okay, right, here we are, only a week late.  Not so bad, really... at least I'm still keeping up with the show.  Sure, it's not the perfect situation, which would involve the writeup being completed using only the mental power of my massive, pulsating brain, but it's close.  Oh, and codfish.  There would be some nice beer-battered cod with a tasty tartar sauce involved in a perfect situtation, too.  On Friday, after the business trip was officially over but while I was still in Chicago, I had dinner at The Cheesecake Factory with three managers who had their flights cancelled, and I can recommend their fish 'n' chips.  Which is not to be confused with fission chips, which tend to go bang when you dip them in tartar sauce.  They don't mention that in nuclear physics class.  Speaking of not mentioning things in Physics class... 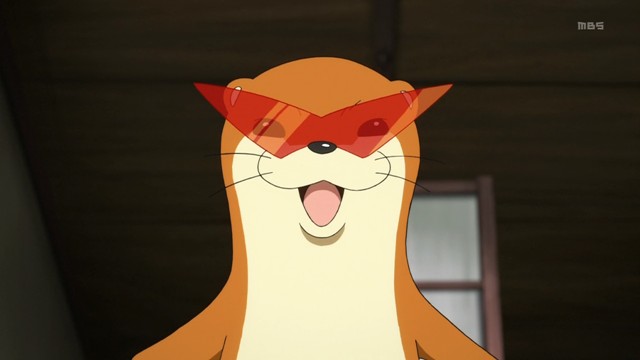 ...have these glasses from Gurren Lagann become an anime meme, or what?  After seeing the Red Headed Freak out the door as she heads to summer camp, lil' sister Momo and Gendo Plushyferret chat for a second about "beginning the operation," and out come the glasses.  What's really annoying is that I hated Gurren Lagann, yet it's hailed as a masterpiece of the mecha genre, if not anime as a whole.  I just don't get it.  Oh well, so it goes.

But that's a discussion for another day.  For now, there is Vividred Operation.  Which, I hasten to point out, is not considered a masterpiece of any genre.  Unless the genre is "butt shots of middleschoolers," in which case it's groundbreaking.  And deeply, deeply troubling.  You'll note, of course, that I'm still working on it, so maybe not so troubling as all that.

1 Himawari seems to be in charge of Gainaxing, and she's really good at it.

2 When I got to that first shot you grabbed of Rei, I knew that would be a lead pipe cinch to be in a certain someones top rotation thing...

The sad thing about Himawari is that most of the time, especially in the opening credits, she runs like Hank Venture.

3 Yo. *raises hand* I hated Gurren Lagann, too.  Except for the awesome character design of Yoko.  Which brings me back to VividRed, because Yoko was fourteen.

5 Ben, you're not alone. I got about 7 episodes into it and simply couldn't tolerate the idiocy any longer. I've never had any urge to go back to it.

7 Never watched that one, either.

8 KnT is great, even awesome, but it's demo focused and is ridiculously drawn out. It gave up before the end of the 1st season. However, it's one of the few franchizes that my Japanese coworkers generally know about. That means going level with Jojo, One Piece, and Gundam. Gurren-Lagann and even Naruto do not have the same mainstream recognition.

9 Wow.  Now it gets awkward.  I adore Kimi ni Todoke.  But, yeah, it could be shorter.  And it has the second-season, everything-was-roses-but-now-there-is-a-dark-cloud-hanging-over-the-relationship-that-might-mean-their-love-is-doomed plot.  But it's just a hangnail.  Or something.

10 Yeah, the second season was unnecessary - which is probably the worst thing you can say about a sequel.

Vividred Operation Ep05 For a second there, I thought about doing a Nutshelling for this episode, too, but I decided against it.  After all, it's the Dark Girl's introduction episode, maybe they'll tell us where to get that great scarf... and perhaps we'll learn her name, too?  Oh, wacky Wonderduck, wanting so much out of your anime.  Next you'll be asking for "plot" and "characterization", too.  Like that'll happen in Vividred Operation!  So, to quickly recap: Team Aquos has been finalized, they've defeated all the Alones that have been thrown against the Phlebotinum Engine, Akane's a redheaded freak of nature... or is she?  I am of the opinion that her superhuman skills are in fact because she's not entirely human, but part Alone.  No, I have nothing to base that on, other than her being stronger and faster than any normal person should be.  We'll find out eventually... or not.  Oh, and Gendo Plushyferret is the bad guy in all of this.  Ooh, plot twist!  Well, he is in my version of the show, and I think I've got a good track record of my alternate versions being much better than the originals, no?  But, speaking of this show right here, Ep05 has already begun!  Let's see what's going on in the City Island of Townsville Izu Oshima, shall we?

As is normal for a morning, the RHF is out delivering newspapers on her flying bicycle; as we catch up with her, she's riding along the dock of the bay, watching the tide roll away, when suddenly... birds! 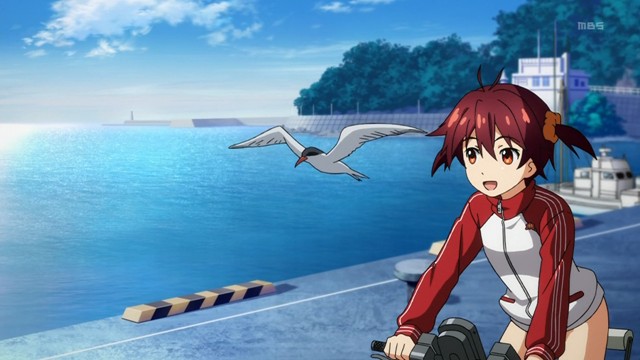 Well, bird.  Singular.  But there will be more, oh yes, many many more.  And early in the morning, they are very... very... hungry.  Somewhere offscreen, Alfred Hitchcock is rubbing his hands together eagerly. *ahem*  Excuse me.  Bird.  Flying near RHF.  Of course, this delights the RHF, who's probably more chipper about life than even Akari from ARIA.  But then, when you can convert to a magical girl with enough firepower to level very small countries, why shouldn't you be cheery?  And speaking of cheery... 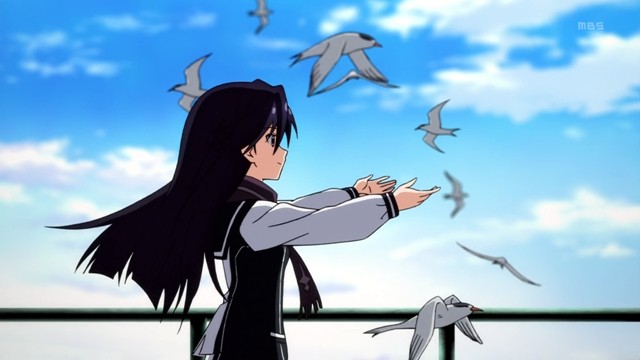 Ohmygawd, it's Dark Girl... and she's smiling.  Yup, that seals it, she's my favorite character in this show, no matter what's going on.  She's currently being swarmed by seagulls, but that's nothing uncommon.  Anybody who's been to Seattle's waterfront and bought some french fries knows all about that.  Somewhere back at the Old Home Pond, there's a picture of me, standing outside Ivar's Acres of Clams Fish Bar ("Keep Clam!") with a french fry in my hand.  To my right, there's a gull swooping in to claim his nummy goodness from the side of the shot, while another gull is dive-bombing in from above and behind me.  And, having browsed Ivar's website, I've just discovered that you can order their clam chowder for home delivery... I think I might just have to do that, oh my heavens to betsy yes.  Many people claim that Boston clam chowder is the best, but I simply can not believe that, not after having Ivar's.  When I was out visiting friends in Seattle for a week, lo these many years ago when I had friends in Seattle, I literally had at least one bowl of Ivar's every single day... and felt bad that I couldn't have more.  When my departing flight was first delayed, then replaced after six hours on the ground (one of the friendly airline employees mentioned that an engine fell off the plane.  I assumed they were joking.), I was quite pleased... SeaTac had an Ivar's, after all!  Oh dear, I appear to have wandered off-topic once again. Let's get back to the story.  The RHF disturbs Dark Girl and her... I'm sorry, I can't not do this... her flock of seagulls, and... 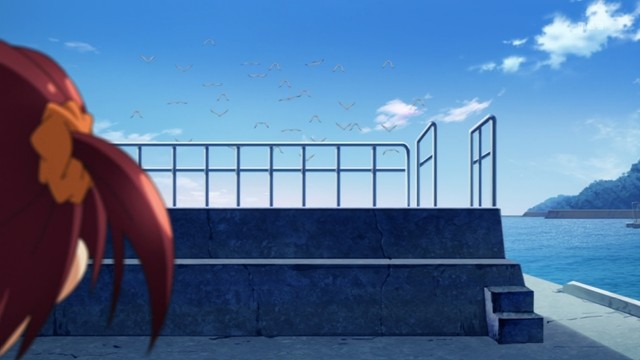 ...poof!  The flock of seagulls flies away, Dark Girl disappears from our view, leaving behind only one very confused RHF.  Oh, and an annoyed Wonderduck.  Really, if they wanted to rename this show Vivid Dark Girl Operations, I'd be fine with that.  If they had all the music done by '80s bands, I'd be really okay with that.  If some studio feels like doing this hypothetical series, I promise to do an episodic review.  If there's F1 cars and rubber ducks in it, I promise that the final episode's writeup would be the last thing ever posted here on The Pond.  Pinky swear. 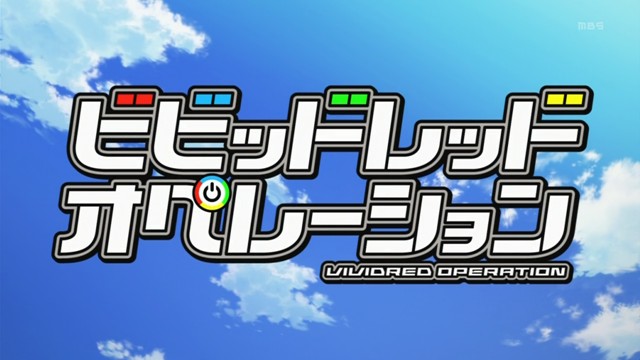 Somewhere, a longtime reader of The Pond has just opened a kickstarter campaign to make that happen.  Hell, I'd kick in a fin or a sawbuck m'self, just because I could.  If you think about it, there's very little that would be cooler than to say "there was an anime made for the sole purpose of closing down my blog."  And by cooler, I mean "geekier".

1 When did you wear them?

Vividred Operation Ep03 and Ep04, Nutshelled Okay, so this project is succeeding about as well as Ben-To!, except now I'm falling behind on a currently-airing series.  Swell.  Ep05 aired a couple of days ago, and I still haven't done Ep03 yet... not the best plan for success ever, I'll admit.  Fortunately for me, if there were two episodes I could give short shrift to, it'd be these.  Simply put, for all intense porpoises, they're repeats of Ep02, just with new girls being added to Gendo Plushyferret's combat team.  I'm going to assume that you remember what happened in Ep01 and Ep02; if you don't, feel free to go back and re-read the writeups.  I think they're pretty clever, m'self, but then I would, wouldn't I?  So go ahead and catch up, why don'tcha?  I can wait... here's some music for you while you read.

You back?  You've got the basic idea in your head again?  Okay, good.  Let's get on with Nutshelling Ep03 and Ep04!

No, no, that's not what happens, proving once and for all that this really is a fantasy show.

In that sentence and the 4 previous Wonderduck has described all that is wrong with the world.

2 While you're contemplating kendo-girl matchups, I'm thinking Himawari vs. Furugoori (Robotics;Notes) in some kind of Battle of the reclusive computer nerd girls.  I have no idea how that would work.

I've been sacked with overtime and trying to squeeze in work on my novel, so while you're an episode behind on VO, Robotics;Notes just came out with episode 16.  Oh god, it's a double season and I'm 10 episodes behind!  At least Nekomonogatari is only four episodes.

3 That look on her face is, "Come on, come on, boot up already! Sheesh, I'm going to have to speed up this thing or we're gonna get killed!"