Vividred Operation Ep02 It's time once again for everybody's favorite hyperintelligent duck to shamelessly give the business to an innocent, unsuspecting anime.  I'll admit some reluctance to use the term "innocent" to describe Vividred Operation, as it seems very much like the Production Staff's familiarity with the word is passing at best.  Still, that's what makes these things so much fun, right?  I suppose an argument can be made that using the word "fun" to describe these episodic writeups may not be appropriate, but that's not for me to say.  I just write 'em and let you, my intelligent, good looking, well-dressed readers, make the call.  By the way, have I mentioned how great your hair looks?  Because it's flat-out amazing.  How do you get it to do that feathering-and-flip thing?  Seriously, I envy you your hair. 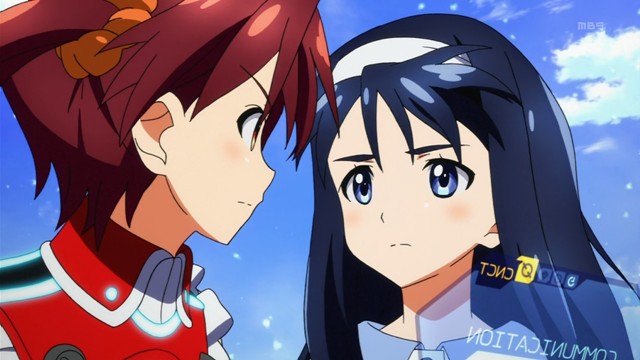 We pick up Ep02 pretty much where we left off in Ep01, with Akane (left) ascended to Magical Girl status amd Aoi (right) gazing lovingly into her eyes.  Just then, Gendo Plushyferret says that the two of them are the only people in the world that can fight the alien invaders, and they've got to prepare for docking.  Docking?  As in "symmetrical docking"?  I've completely changed my mind about this series, I'm all over it now!

Man, Vividred Operation has really moved into the big leagues now: it's got an OP and everything!  Too bad I'll never watch it... I actually (almost) never watch a show's OP, simply because of the spoilers that are usually contained therein.  That is, if I actually care about the series; if I don't, I'll watch once.  Yes, I know there are series where the OP is part of the show (the ARIA franchise) or changes every episode (the most recent HidaSketch); obviously that's different.  But in general, I'd rather be surprised.  Okay, now that I've got that out of my system, where's my docking?

I think those are supposed to be F-35's. And having the two girls flying in formation with several of them was pretty awesome.

An interesting thing about the dark haired girl: she has something that looks like a glowing flower on her collar, and one of the petals on it went away when she fired her bow. It's like she has a limited number of shots, and she just used one up.

4 Suddenly I'm reminded of the cheering children in Megas XLR when the school gets smashed...

And clearly the magical girls have something like superman's "Strength Field" that lets them lift Raptors by the radome without snapping it off.

Looking at the damage to the carrier deck... I wonder if there's a TV Tropes for "Everything is made of stone" based on the way things break into concrete rubble when smashed.

5 Totally F-35. It only has a single engine. It doesn't look like it has the port for the VTOL jet, so it's not that version. It may very well be the naval version.

And now I shall demonstrate my nerdery: The first thought I had when I saw those F-22 looking things in the first episode was, "I thought those weren't going to be exported..." The second thing was that they only had one engine, upon which I actually looked it up.

Vividred Operation Ep01 So there's really only one show that I'm even mildly excited about this season, and that's this one, Vividred Operation.  As I mentioned in the previous post, nobody has the faintest idea what's going to happen with it: it could be great, it could be stupid, it could be stupidly great!  Well, no matter how it shakes down, I'll be doing episodic reviews for it, probably on Saturdays.  It airs on Thursday, but there's that whole work thing to think about... I'm not as young as I used to be, alas.  I don't have as much energy, as much hair, or as many teeth as I did when I was a kid.  So let's take a look at this here show, let's see what we're being given to work with, shall we? 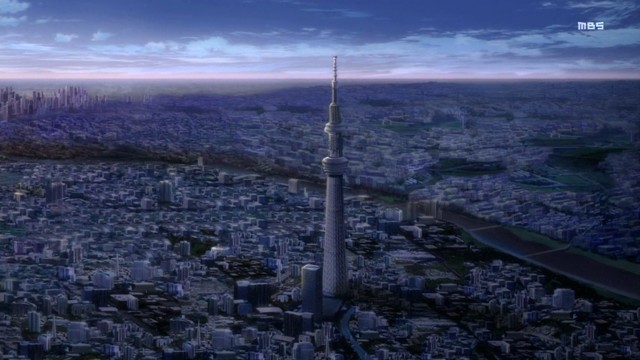 The City of Townsville! unknown moniker, and something seems a little out of place in it... like, maybe, the enormous tower in the center (thanks for pointing that out, Muppet!) that simply dwarfs everything in the vicinity?  Seriously, look at that thing, it's easily five times taller than the tallest structure nearby, and maybe twice as tall as the skyscrapers in the background.  In an earthquake-prone country, no less.  Can you imagine the number of zoning ordinances that had to be eased so it could be constructed?  Pilots flying into City must hate the thing with a passion, too.  Plus, it's clear that the powers that be are somewhat lax with their security methods.  To whit... 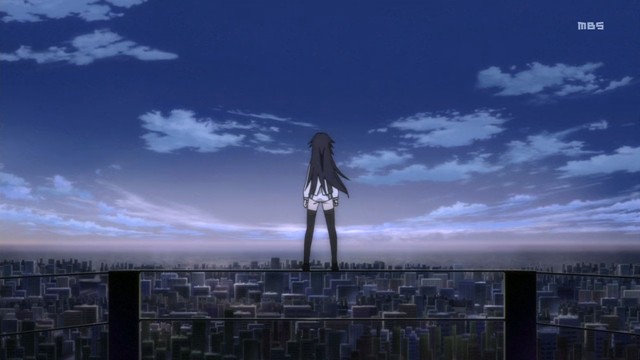 ...there's this young woman, standing on the safety railing on the very top of the tower, watching the sun come up.  Completely unbelievable... I mean, there's not a single iPhone or camera in sight, and there's no way one of today's callow yoots wouldn't be recording this to post on myfaceinatube.com... with the camera held the wrong way.  Kids these days, I tell you. 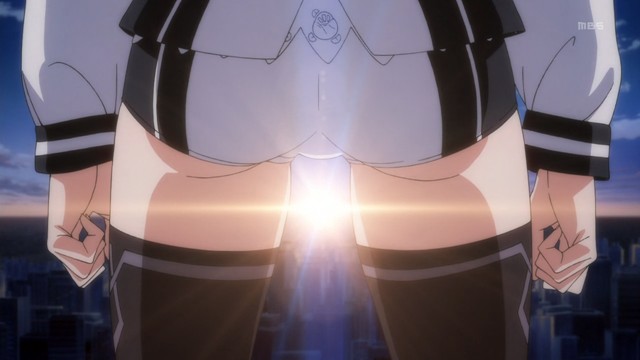 Oh, so it's going to be THAT sort of show, huh?  Technically, she is wearing pants.  Lil' Miss Wallenda up there is, apparently, a member of O2STK, and nothing she does while on-screen clarifies her reason for existing. 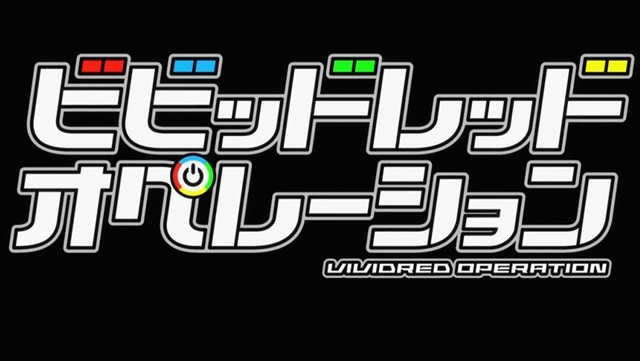 Yup, it's gonna be a good show for me.

1 I had a "wait, what?" moment in this episode. Momo complains at one point because they don't have any money. But there are a thousand companies in the world who would be willing to pay huge to get the plans to that flying bike. By all rights they ought to be hugely wealthy.

2 Yup.  Never mind the whole Infinite Phlebotinum Engine, the flying bike should have made him rich... but then, he DOES have a radio-telescope dish in his back yard.

3 Yep, it's clear that the reason they don't have any money is because grandpa spends every penny of his massive patent licensing cheques on scientific widgetry.  Now that he's a plushy ferret, the girls will live like kings!

Also, that thing that attacked the planes and ships and whatnot?  It's totally a runaway planetarium projector.

4 I made the same comment, and was answered with "if that's really a spectrometer, no wonder they're broke." Ah, it's always better to watch with engineers...

5 I don't know why I bothered hoping that her fear of heights would actually last as a plot device for any length of time. "Oh, I'm cured of that now." Uh... huh. Sigh.

The MST3K Mantra gets a real workout during this show, but I just don't care. The last two anime I managed to stick with for any length of time are Sword Art Online (and I stopped cold once the first arc completed, because I knew that what came next were escalations and repeats of same) and Mouretsu Pirates (best show in years and nobody can prove to me otherwise). I'm trying not to get my hopes up too high for this, but I'll stick with it as long as I can...

6 Oh, and you're not the only one. "Oh, it's vivid red. Gotcha." Too many viewings of "Vandread" over the years? Guilty as charged.

8 Ow, my sides hurt from laughing.

9 Marketing is getting ready to sell USB drives that look like the key.

Great idea, developing the only means of defense and keying it to a middle school girl who's afraid of heights and so hard hasn't shown the slightest hint of fighting skills, unless she means to bean the aliens with newspapers.

The one thing that bothered me about the whole tiltrotor thing is they pointed out that it ran off of UncleFester Engine energy, and I said "Then why does it have turbine air intakes?"

The other thing is that Ospreys have carbon fiber fuselages.  They wouldn't break like that.

10 Watching the helicopter manufacturing process and Ospreys being built made working at Bell Helicopter a wonderful time.

"Then why does it have turbine air intakes?"

To pressurize the cabin?

Because it's a conversion from something that did burn distilled dinosaur, rather than something designed from the ground up with an UncleFesterCo plant?