Rio Rainbow Gate! ep13 Captive's Log Day 89:  It's been nearly three months since I was last free.  Nearly three months since the torture began.  Nearly three months since my sanity began to fade.  Nearly three months since I was first subjected to the nightmare that is Rio Rainbow Gate!.  How was I to know what that first viewing would do to me, both short- and long-term?  At first I resisted... I knew what the Production Staff was trying to do, and I refused to let them break me.  Slowly, however, they weaseled their way under my barriers and I began to... care.  Care about the show.  Care about the characters.  Care about the ultimate outcome.  It was Stockholm Syndrome, a classic case if there ever was one.  The bastards nearly had me then.  Somehow, I got through it with some shreds of sanity and human decency left.  Then I began to hate.  I nurtured that hate and rage and anger as a way to get me through whatever they decided to do to me.  It worked.  I've managed to make it to the end.  One last episode to go and then I'm a free man.  There's nothing they can do to me that'll make the pain any worse, for I can see the end.  I've done it.  I'll have survived Rio Rainbow Gate!.  Come, Production Staff, one last dance... for old time's sake.  Then I'll quit you forever. 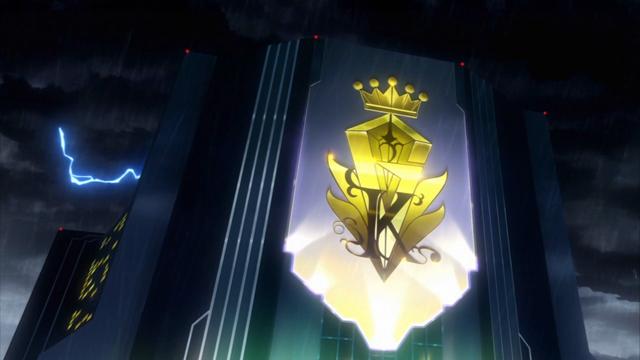 We pick up mere minutes after the end of Ep12, with the final Gate Battle still in progress.  Our Heroine and her sister are locked in a cutthroat game of poker, the first to win fifteen hands is victorious.  The winner gets all 13 Gates, becomes only the second Most Valuable Card Dealer ever, and will get to "see the rainbow," whatever that means.  The loser?  We'd rather not think about that, but it probably involves holographic flying sharks.  When we last saw the game, Rina was up two games to zero.  The situation has changed somewhat. 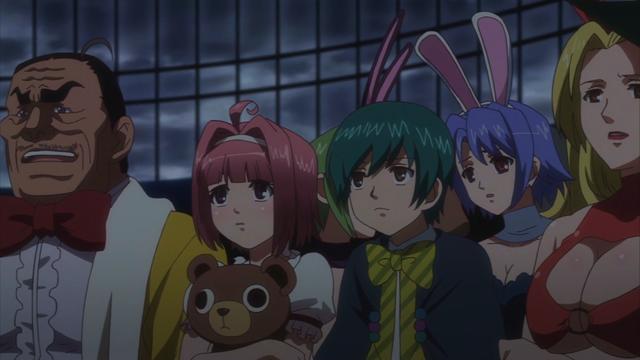 The looks on the faces of the Usual Suspects says it all.  Stunned disbelief.  Growing despair.  A sense of loss, a sense of failure.  Depression.  Sadness.  Hopelessness.  In short, the entire Rio Rainbow Gate! experience, all in one screenshot.  Our Heroine has lost thirteen hands in a row, and as we watch, the fourteenth goes to Rina as well. 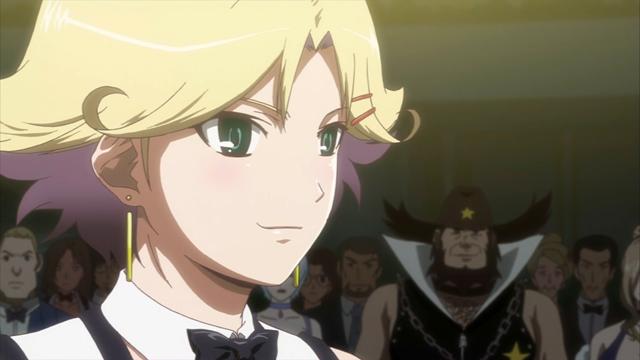 The amount of raw smug coming off of Rina is amazing as she mocks her sister's performance.  The culmination of her life's ambition is at hand, her vengeance nearly complete. 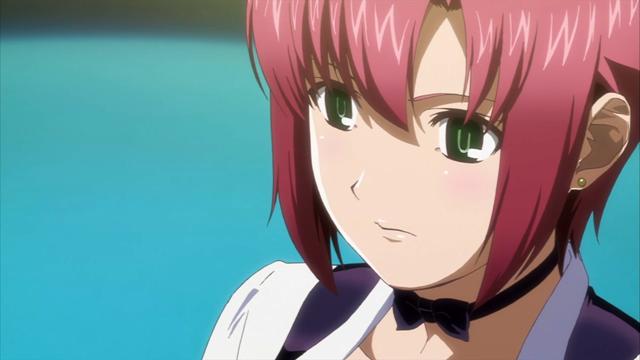 And yet, for someone about to be completely embarrassed, Rio seems to be remarkably unconcerned... almost like she knows something nobody else does.  In fact, her attitude begins to rankle Rina, who actually gets angry.  The Owner yells from the crowd that Rio doesn't need to throw the game to make up for her past transgressions against her sister, that it's all right to win... and Rina goes full psycho, screaming accusations across the table.  Rio just smiles and says something to the effect of "it's just the way the cards are falling.  Isn't that the way casino games are supposed to work?"  The final hand is dealt.

1 At was Post twice looked.
I fear you not are going want to them like brain dangerous is stress.

Evil Cartia can't drown, because her uni-boob clearly would function as a floatation device.

Was Risa's mother all better in the end?  I saw that scene where she's still in bed hugging Risa, but the fact is she's still in bed.  That means either she only wished to see her daughter happy before she kicked the bucket, or that Rio simply half-assed the wish fulfillment.

I'm going with the half-assed theory, since everything else about this show is half-assed.

4 Apparently the new girl, Nina, has her own line of Pachinko machines, so it's a battle of the all-stars!

On a related note, as the world's most devoted fan of Rio, it's clear that you need to own the art book. Or maybe a 3D mousepad (I would not suggest the Mint hug pillow).

Some tangible reminder of the anime which has so enriched your life...

5 Apparently the new girl, Nina, has her own line of Pachinko machines...

As far as the merchandise goes, I don't think I'd complain about owning this... or this, though the hair is the wrong color.

6 Your reaction at the hook for a second season was almost as enjoyable for me to read as when I was watching Mike Roe vs. Lake Erie Water Snakes on Dirty Jobs.  Now I'm actually looking forward to the 2nd season....

9 You are a better duck than I; I couldn't finish the series.  I'm not sure I finished the third episode.  I spent a week watching it in two-minute bursts.

And I really liked the first episode.

10 Thanks for viewing and reviewing what the rest of would rather not....