Ga-Rei Zero, Episode 12 Last episode, the Schoolgirl In Black took on The Agency... and won, killing KDad, The Boss, Motive Power Kiri, one of the Nabuus, the HMMWV and a gazillion grunts, turned Mr Laser Weasel into a bowl of pudding, and scarring Isayama along the way.  It looks bad for the Tokyo, and by extension the entire world.  But don't forget that the Schoolgirl in White, Kagura, has taken up the mantel of Byakuei's Master.  It's time for a showdown! 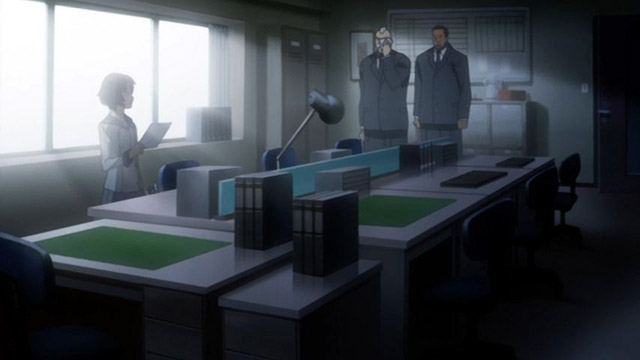 But first, it's time for some red-hot paperwork action!  Actually, Kagura returned to the office, only to find a note from Mr Laser Weasel.  We never get to see what it says, but "I quit" seems to be a good guess.  Maybe "I'm running in abject terror" would work, too.  Isayama, quite sensibly, says that it's better that way; no use in him getting killed because he can't actually bring himself to hurt his former fiancee.  What's left of the Disposal Team is going after the Schoolgirl In Black, even though she just kicked their butts all the way 'round Tokyo, across the Kanto plain and nearly to Hokkaido. 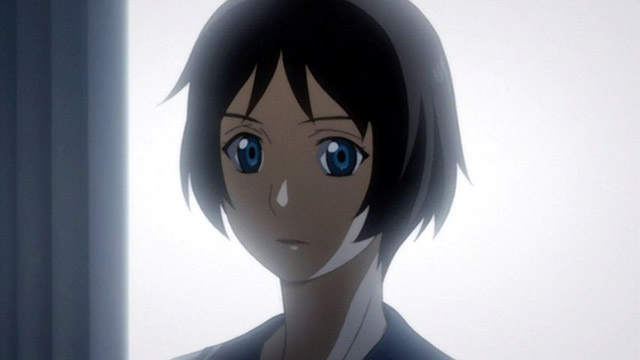 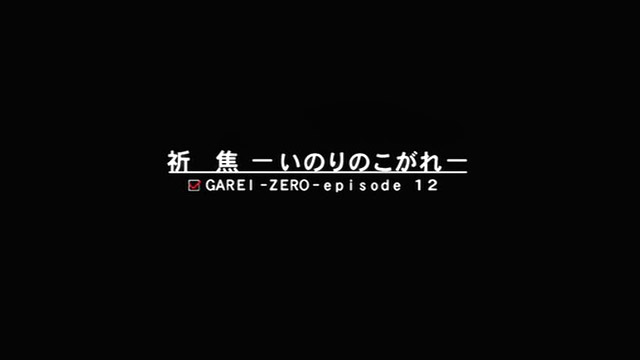 1 I found Pocky at a grocer near my apartment.  There's a Hummer dealer a few miles south, but I'm waiting until I locate a couple of female teenage exorcists before I buy one...

I'm hoping this shows up in R1 - I want to hear my friends' reactions after watching the first episode!

No, because Yomi returns! Uh, at least, at Ga-Rei mangas. Her name is IZUMI ISOYAMA, but she's shy!

And, of course, The Agency commanded by The Boss who was The Boss before The Boss be The Boss says that "there's no relation between both!". Sure thing, and MIB was chasing a farmer instead of a bug dressing a farmer. lol

Ga-Rei Zero, Episode 11 If my memory serves me correctly, last episode saw the show catch back up to Episode 02, and the Schoolgirl in Black (formerly known as Yomi) kill off half the cast.  Again.  However, she only got one member of the Disposal Team, Kazuki.  At the very end, Kagura's father (KDad) appeared in the nick of time, saving his daughter from joining the ranks of the corpses... and setting up a massive showdown between the two strongest Spirit Beasts, Ranguren and Byakuei.  So who's power reigns supreme?  We are set... let's get it on! 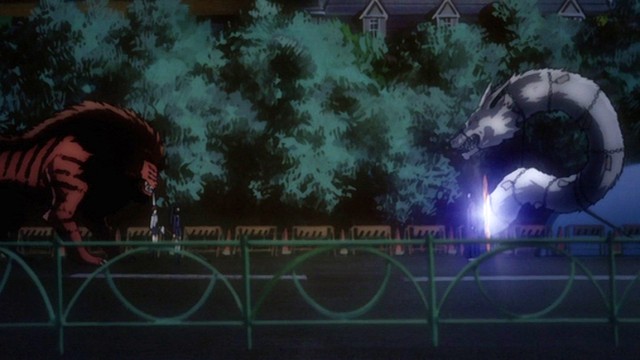 Cue two different staredowns and posturing.  Of course.  It's an anime fight scene, there has to be a staredown. 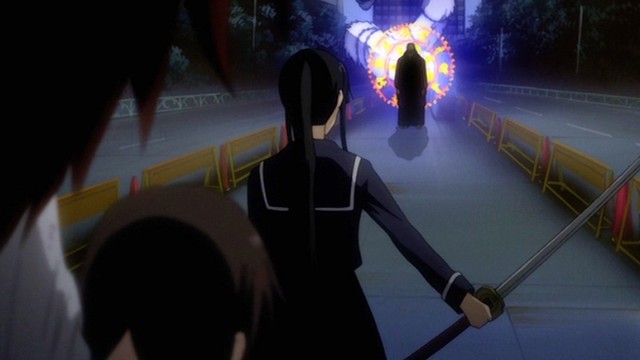 And if that wasn't enough, throw in some trash talking by the Schoolgirl in Black.  If I didn't know any better, I'd think this was a pro wrestling match.  Instead of, y'know, a fight that will likely end with the death of one of the two of them... and the destruction of half of the city of Tokyo. 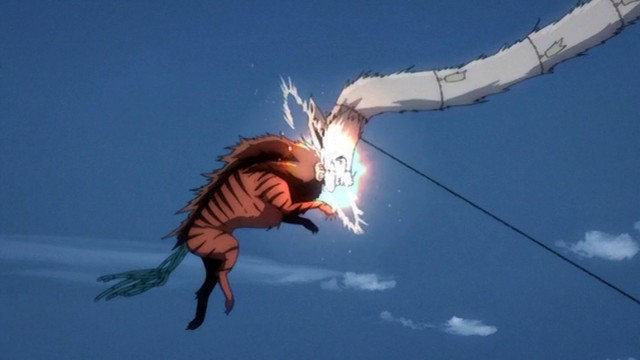 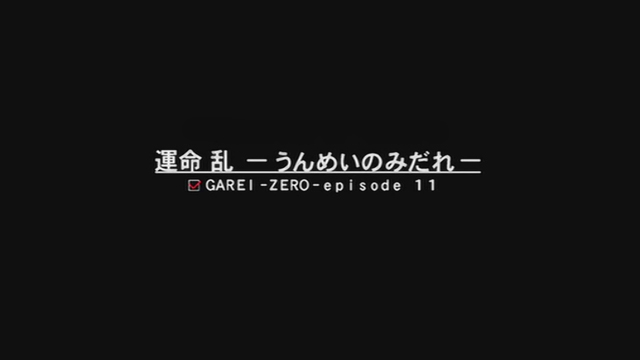 1 I can't believe how utterly stupid this is.

2 ...says the person who who watches Aika Zero.

Aika Zero compensates with lots of panty shots...  er, lots of really cute girls who are drawn well. This hasn't even got that going for it.

Oh, and Aika Zero was only 3 episodes. They knew when they'd outlived their welcome.

I've always said that both of those series were stupid, too.

Ga-Rei Zero, Episode 10 In the last episode, Yomi turned into the Schoolgirl in Black after being abandoned by everybody close to her.  Of course, this was after she was turned into a pincushion by the Big Bad, who then healed and implanted a piece of the Death Stone into her.  Hell's comin' to breakfast, and it's hungry... so let's get cracking on Episode 10. 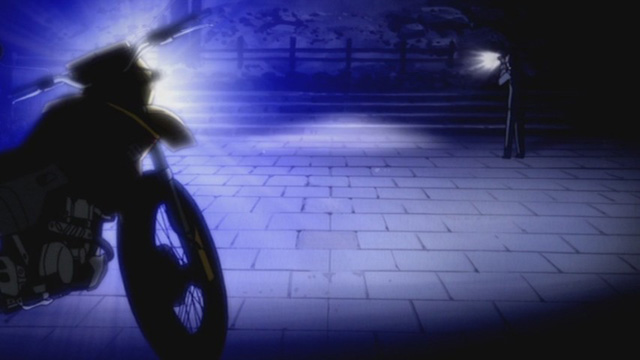 Tonight on CSI: Tokyo, Noriyuki appears to have shaken off his lethargy and angst (not that it was unwarranted) and is actively investigating at the site of Yomi's attack. 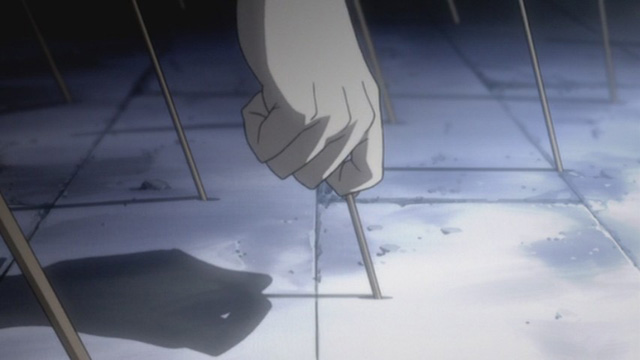 Yup, the old "stick in the hole" trick, so as to discover what direction the projectiles came from. 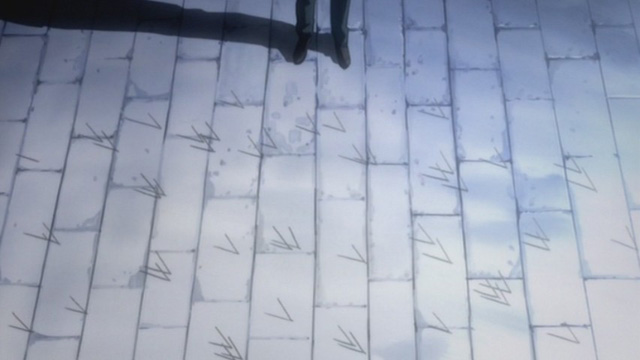 Of course, they all came from the same direction... a source other than Yomi herself.  In Mr Laser Weasel's mind, this pretty much proves that she was attacked.  Putting away his camera, he mutters to himself, "I suppose she... got the point." 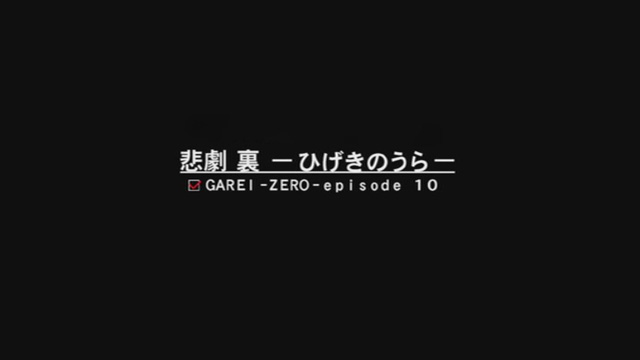 2 Is there any possibility of this ending well for anyone (except the main villain)?

This show strikes me as very depressing, as well as horrifying, and not just because of what that pretty-boy SOB did to Mei and Yomi.  There's a larger issue here; if I understand this correctly, the Agency is the only thing standing between humanity and the Cute Blue Butterflies of Doom.  And we're watching the Agency get defeated in detail.

3 Old Man, come join the Anime Side... we have cookies.

Peter, "ending well" is a rather vaporous concept.  The way it's going, if any member of The Agency survives, it'd have to be considered a win.  Horrifying, yes... considering that it's a horror show, that's appropriate.  But depressing?  Y'know, I've watched it all the way through once, then 10 episodes in exquisite detail to get screenshots, and "depressing" isn't a term I'd use for it, unless you consider movies like Saving Private Ryan or Otoko Tachi no Yamato depressing.

Because the more time I spend with it, the more I think of it as a war movie.  You've got the Disposal Team playing the part of the squad of soldiers.  The enemy doesn't have rifles and tanks, but screaming trees and flaming armadillos, but the concept is the same.

But you're right about the Butterflies of Doom... and while The Agency isn't the only battleline out there (the Ministry of Defense has their Grunts, after all), it's certainly the most effective.  And they're still getting beaten.  Dramatic, no?

Is there any possibility of this ending well for anyone (except the main villain)?

Don't forget that is anime was supposedly created as a "prequel" for a popular manga, so surely someone will survive.  Maybe it's the box of Pocky stix?