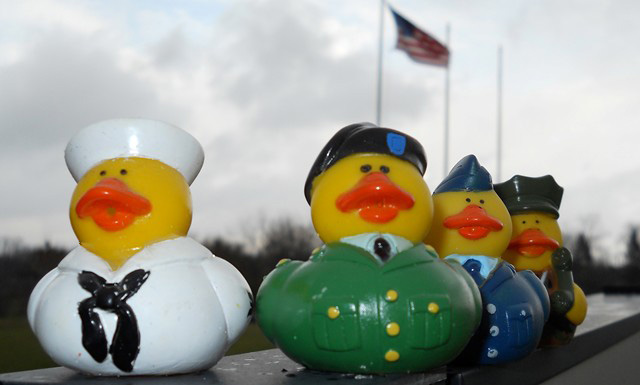 At 11 o'clock in the morning of the 11th of November, 1918, silence fell across the Western Front.  No shots rang out.  No artillery rounds exploded.  The cease-fire that would lead to the end of World War I had finally been declared.  Around the world, people everywhere celebrated... and mourned.

In 1919, President Woodrow Wilson made November 11th Armistice Day, a national holiday.  In his proclamation, he said:

"To us in America, the reflections of Armistice Day will be filled with solemn pride in the heroism of those who died in the country's service and with gratitude for the victory, both because of the thing from which it has freed us and because of the opportunity it has given America to show her sympathy with peace and justice in the councils of the nations."

After World War II, a movement began in Emporia, Kansas, to turn Armistice Day into a holiday honoring all vets.  In 1954, Congress officially replaced "Armistice" with "Veterans", and the day has been known as Veterans Day ever since.

Today, we honor all those who have served our country, and remember those who gave their lives in her service.

Without you, we wouldn't be able to do the goofy things we do today.  Thank you.

1 I've lurked here for along time, initially coming because of the ducks in anime but stayed for the military history posts. I thought you could help me puzzle out a picture I just posted over on my anime blog.I decided to pay my respects to veterans this year with a post about my grandfather who was a veteran of WWII and I included some pictures that he had sent home during the war. The picture in question is the last one on the page and shows two German airplanes bolted together which is something I've never heard of before nor understand why they'd do something like that. Do you know what type of plane that was?

I posted an answer on your page, but the last photo you have shows a Mistel.

The Mistal was an attempt by the Luftwaffe to produce a weapon aimed at destroying high value targets which were too well protected by air defense for a manned aircraft to get through and conduct a precision attack.  The nose of the bomber was replaced by an explosive warhead, and the entire 'aircraft' was piloted from the fighter.  Once the Mistel was aimed at the target, the fighter would separate from the bomber and return home while the latter flew at the target, without having to worry about being deflected by anti-aircraft fire.

The guided anti-ship missiles used by the Luftwaffe (Like the Fritz-X and Hs-293.) were the other approach used by the Germans for the same mission.