The Twelfth Day Of Duckmas 2011 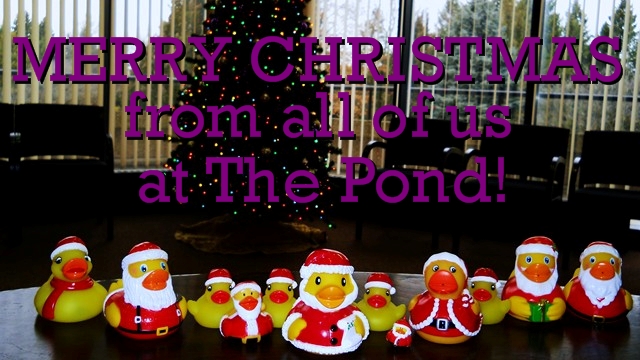 I can't really add anything to that.

Another Duckmas season has come and gone.  The Flock have already opened their gifts and are busy doing what duckies do on Duckmas morning: having a breakfast of freshly baked rye bread and orange juice (duckies love orange juice).  Their party gives me a chance to sneak off and wish you, my readers, happiness and security for the coming year.

And ducks.  Lots and lots of ducks.

Merry Christmas to you, too, sir.

2 Don't forget to turn on the TV so your flock can watch the big game tonight!

The Eleventh Day Of Duckmas 2011 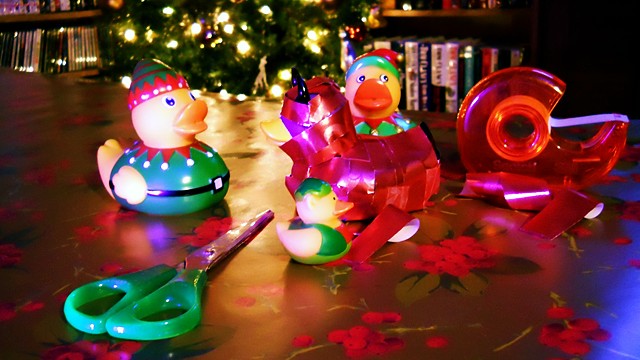 Did you know it takes 49 minutes to wrap a rubber duckie?  I know that sounds unlikely, but that's how long it took to get the purple devil duckie ready for this picture.  Fortunately, wrapping easy, simple shapes, like boxes, tesseracts and klein bottles takes much less time than wrapping a duckie, so I should be able to get everything ready for Christmas.

I don't know about you, my readers, but I do have a little tradition when it comes to gift-wrapping.  I do it late on Christmas Eve, mug of hot chocolate (complete with immersed candycane) at the ready, whilst listening to WGN-AM out of Chicago.  In the past, the overnight team has a high school choir in the studio with them, so I wrap while they sing and banter.  It just occurred to me, however, that I won't be able to do that this year, as the overnight show is only on weekdays, and they have someone else on the weekend.  Woe is I.

It's kind of amazing how fast the Twelve Days of Duckmas has gone this year.  While much more challenging than normal due to the lack of winter weather (and I'm probably the only person in Duckford complaining about the lack of snow), I think it's turned out okay.  Hopefully you've gotten a kick out of it; the Twelve Days is just about the only time of year I can really be artistically creative, so I enjoy it quite a bit.  Even if it does disrupt normal blogging here at The Pond.

Big finale on Sunday... see you then!

1 Only?  Sure there are Easter themed Duckies.  Or at least an Uncle Sam duck who can do service on the 4th of July

2 Click on the "12 Ducks of Xmas" category to see what I do for other holidays, Mauser.  Having said that, yes, I can be creative during those (particularly Halloween).  Duckmas requires a ton of pre-planning, however.  I start writing down ideas in August, though I have one concept ready for next year already (involving the World's largest artificial skating rink).  It's more rewarding.

This year, though, has very much been off the cuff and on the fly.  Most of my ideas had to be shelved due to lack of snow.  Pulling that off is a different type of rewarding.

3 Just wondering: how do you wrap a tesseract? Do you have a diagram handy?

4 Don, you just need to think both inside and outside the box simultaneously. 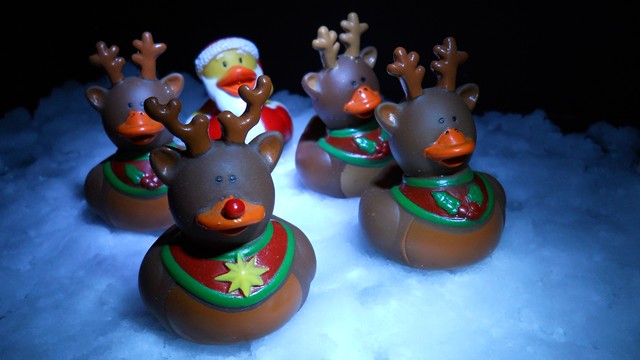 Lack of snow gotcha down, Binky?  Have I got a solution for you... Insta-Snow!  Just add water and voila!  A lovely snow-like substance... except in my case, because I bought a cheap knockoff ("Insty-Sno") and ended up with a not-as-lovely slush-like substance that eventually ended up looking like well-packed snow.

Y'know, I have to admit that I was surprised at how much it looks like snow "on camera".  However, I am saddened to announce that Insty-Sno did a number on my blackbox setup, and I had to throw it in the dumpster.  Not like that's a big deal or anything... it's just a cardboard box with posterboard lining the inside, I can recreate that at will.  The old setup was pretty worn out anyway.

If you want to see what this picture looked like from a different angle, just click "more"! 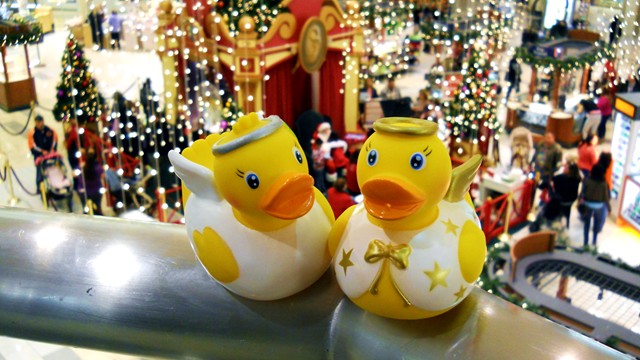 The annual sojourn to the local shopping mall!  I can state for the record that, at least in Duckford, the whole shopping frenzy is alive and well.  On an aside, I'd like to say "hello" to Stephanie, the young lady who cut my hair Wednesday night.  Good job, it looks great... or at least as "great" as my hair ever looks.

The Eighth Day Of Duckmas 2011 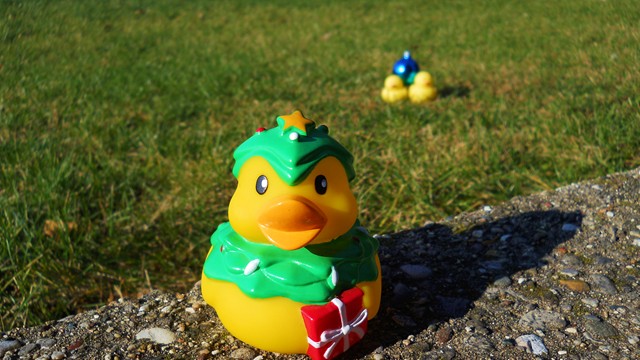 A tree needs to be decorated and trimmed, even if there's no snow on the ground.  Right?

1 And for some reason the last dozen or so posts JUST NOW showed up in my Google Reader. Sigh.
Excellent work so far, as always. I need to start doing more outdoor shoots...

The Seventh Day Of Duckmas 2011 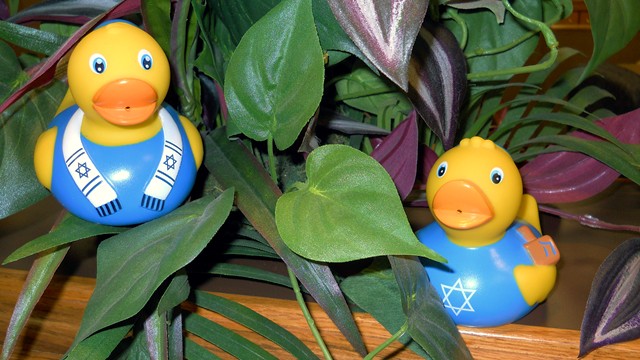 Happy Hanukkah to all of The Pond's Jewish readers.  May you get lots of gelt and eat lots of latkes and pontshkes over the next eight days!  Mmmmmmm... latkes... there's very little as good as a latke with sour cream.  Excuse me while I drool.

1 A local deli here serves a "CB latke".  'Bout a half-pound of corned beef between two latkes.  Droolin' just thinking about it... 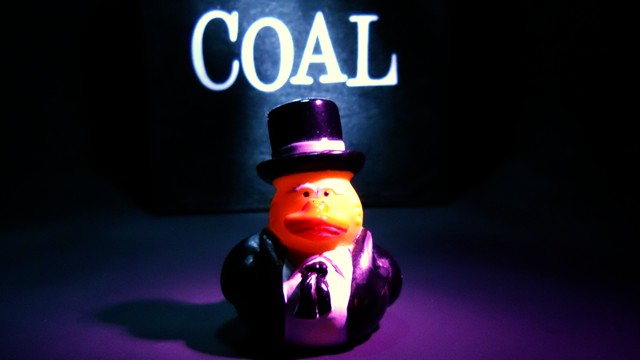 "Merry Christmas!  Out upon merry Christmas! What's Christmas time to you but a time for paying bills without money; a time for finding yourself a year older, but not an hour richer; a time for balancing your books and having every item in 'em through a round dozen of months presented dead against you? If I could work my will, every idiot who goes about with 'Merry Christmas' on his lips should be boiled with his own pudding, and buried with a stake of holly through his heart."
-Ebeneezer Scrooge, from A Duckmas Carol. 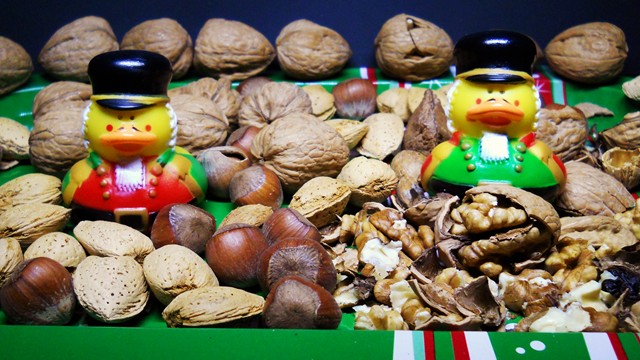 If you wanted to whistle music from The Nutcracker as you look at this picture, I wouldn't blame you.

The Fourth Day Of Duckmas 2011 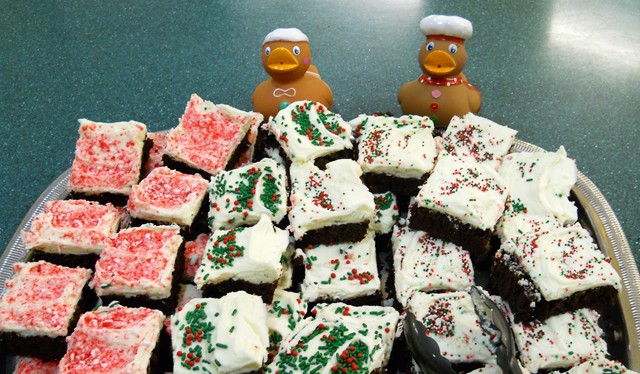 If there's one thing that just about every college or university student can agree on, it's that the food in the cafeteria is never good enough.  I actually rather like the food service at Duck U, m'self.  Sure, it's no gourmet five-star restaurant, but it's good, tasty food with a wide and varied selection every day.  Nevertheless, it's probably written in the handbook that a college student has the god-given right to complain about the food at their school, and the student body at Duck U does so at every opportunity.  Breakfast, lunch, dinner, none of it is acceptable.

Except for the desserts.  Those earn universal praise.  Cookies, cakes, ice creams, donuts, scones (om nom nom!), puddings, and on and on... all of it made right there in the Duck U kitchens.  The ducklings are lucky, and they know it.

There was a lot of "soooooo cute!!!"ing at the sight of the gingerbread duckies that day.  It was kinda funny, actually.

We got less than a quarter-inch of snow last night.  It's already melting away.

1 You're boggling my mind at the sheer variety of Christmas-themed ducks out there. 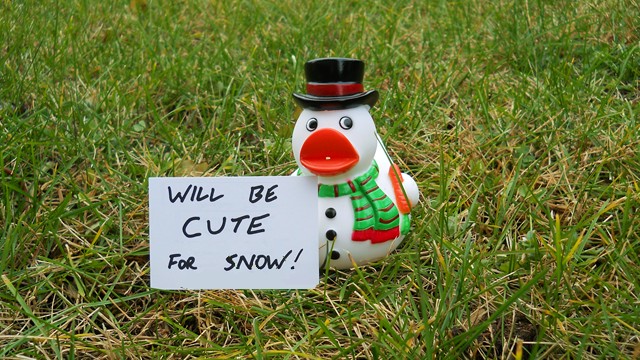 When the snowducks begin to grumble, you know there's something big going down.

The Second Day Of Duckmas 2011 Gotta keep the rain off the presents! 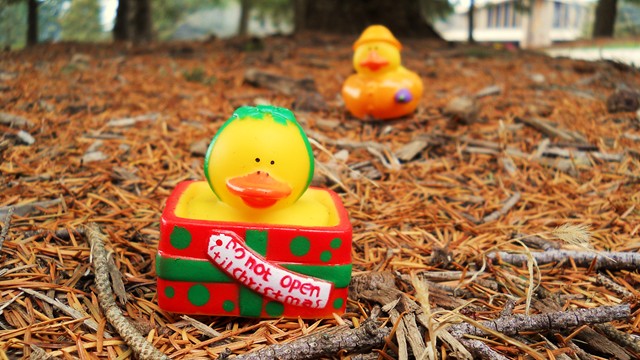 You can't tell from the photo, but it was raining to beat the band while I was taking this.

Rain.  Less than two weeks from Christmas, and it's raining!  Doesn't Ma Nature realize I have duck pictures to take???

The First Day Of Duckmas 2011 Push the button, Frank, it's time for the Twelve Days of Duckmas again! 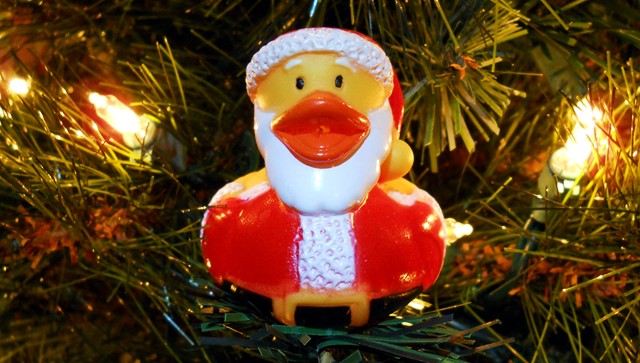 Ah, the duckie in a fir tree, the usual beginning to the Twelve Days of Duckmas.  This will be the fifth year of holiday duckies, and this one's going to be different from the previous four.  See, in the past there's been no shortage of snow around Pond Central and Duck U when the Twelve Days came around, but not this year.  According to the weather nabobs, there's a chance of flurries in a week or so... and that's it; snow-free until sometime after the 25th.  I love a challenge.

Tune in every day between now and Christmas Day for a new Duckmas photo!

1 Yay! 12 Days of Duckmas! I love this tradition of yours!