Release The (mini)Quacken! Not so long ago, friend Brickmuppet found himself terrorized by the latest appearance of artist Florentijn Hofman's greatest creation.  At the time, I expressed great envy of 'Muppet, knowing that The Duck would surely never make it's way to Duckford... this city wouldn't know great art if it jumped up and bit 'em.  After all, they think that orange steel pipes stacked on top of each other and welded together is Art.  So I figured that 'Mup's pictures would be the closest I'd come to the second-largest-rubber-duck-I've-ever-seen.  That is, until I came home from the Duck U Bookstore one day and found a USPS notification stuck to my door... a package delivered, and taken back to the post office.  Confused, I asked for redelivery.  After a couple of days worth of Wild Goose Chase, I finally corralled the thing... to discover it been sent from Brickmuppet.  Expecting another one of his exploding kiwi attacks, I opened it very gingerly... and found this: 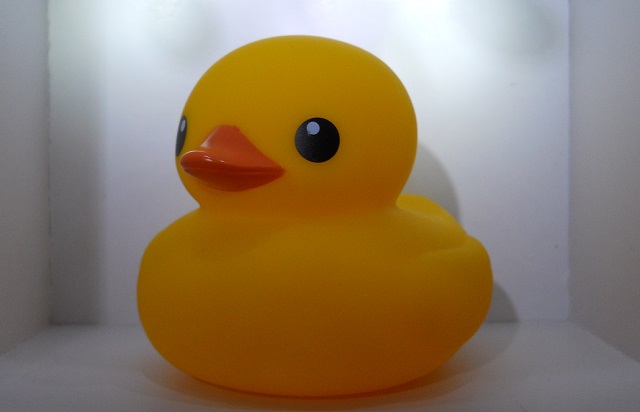 It's my very own Tolo commemorative Florentjin Hofman (mini)Quacken!  Now, I have a Tolo "chubby duckie", a gift from Ph.Duck from when he visited (amongst other places) Denmark, but this?  This is next-gen stuff, right here.  Plus, it's a numbered limited edition, to boot! 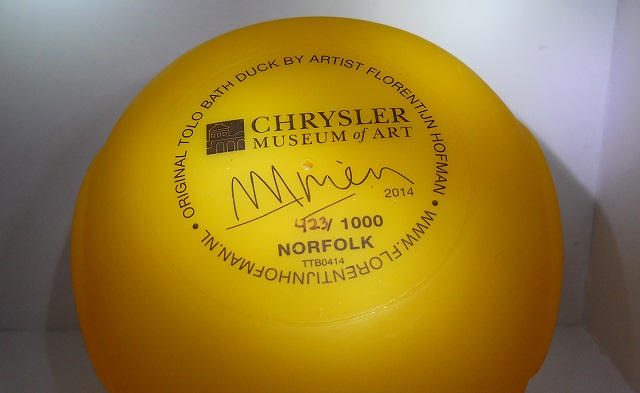 What's even cooler is that "423" is my birthday!  He somehow managed to get me the one miniQuacken that was practically made for me, completely at random.  It was meant to be.

There were other things in the package as well: a book on the Tuskegee Airmen, autographed by a member of that historical unit.  An Osprey book on Zeppelins.  A t-shirt from The Quacken visit, as well as a pin of same.  But the rubber duckie itself is undoubtedly the neatest duckie I've seen in a long time.

1 Tolo ducks are wonderful ducks, and a numbered edition to boot? Fan-freaking-tastic.