The Third Day Of Duckmas 2012 It's a first for the Duckmas photos today... an imposter appears! 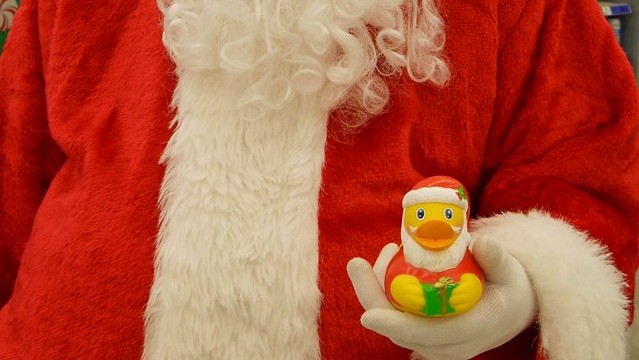 Clearly SantaDuck is the real thing!

So here's the story behind this picture.  I set out on Saturday to head to the local shopping mall, thinking it'd be busy but not so awful.  I was wrong.  I drove two laps around the mall parking lots trying to find a spot that wasn't a mile away from the shops I needed to hit, and failed.  Then I realized "hey, stupid, we're ten days away from Christmas, why does this surprise you?"  Disgusted with myself, I stopped doing laps and headed towards the nearest grocery store... and its parking lot was clogged as well, overflow from the mall.  Now just disgusted, I pulled into a Walgreens for some bare minimums of supplies... just as the heavens opened up and rain gushed down.  Now disgusted and wet, I walked in and was greeted by ImposterSanta.  I did my shopping, ran back to the car, grabbed SantaDuck and took the picture.  ImposterSanta seemed amused and I was relieved... still disgusted, still wet, but at least I got a Duckmas photo out of the excursion.

They're saying we're to get some real snow on Thursday the 20th.  I can barely contain my excitement.


They're saying we're to get some real snow on Thursday the 20th.  I can barely contain my excitement.

2 AWESOME! Well worth the trouble!