Touhou Doujin... ANIME?!?!?! Touhou fandom is something I know nothing about.  Apparently, however, it's godawfully huge in Japan.  Originally a scrolling shooter game by a one-man 'team', it's grown into something much more massive than that.  Oh, the game is still done by the one guy, but there are now either 11 or 14 Touhou games, depending on if you want to count spinoffs or not.  It's so big, that at the recent Comiket there were nearly 900 individual sellers of Touhou-related doujin manga, and the game even has its own sizeable festival (called Reitaisai) devoted solely to a Comiket-like doujin market.

So... hugely popular in Japan, Touhou is.  Fans have assumed that it's just a matter of time before some production company scoops it up and makes an official anime out of it, but as of yet there's been no sign of that happening (one reason might be that ZUN, the creator of the games, wants to direct and write the show himself).  When you boil it down, though, it'd kinda be like making an anime based on Defender or Galaga... who knows how it'd turn out?

But, remember when I said that it was popular in the doujin circles?  Well, one group decided to make their own anime.

Skeptical?  I was.  It's a lot easier to draw a manga than to do a full-fledged anime.  So how'd they do?

The background music is good.  I gather that Touhou has a huge installed base of music CDs out there, mostly all fan-made (one website I saw said that one current torrent of music runs to about 220 gigabytes in size), so there's a lot to draw from. 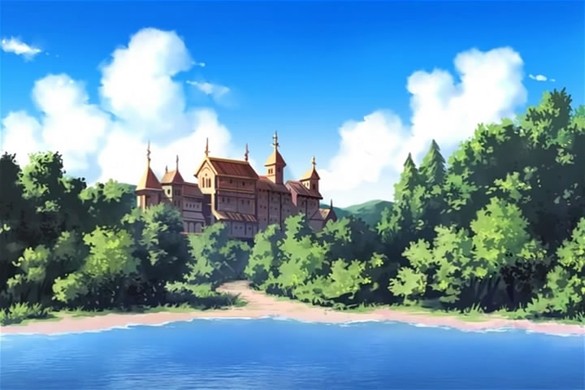 Throughout the episode, the backgrounds look that good: 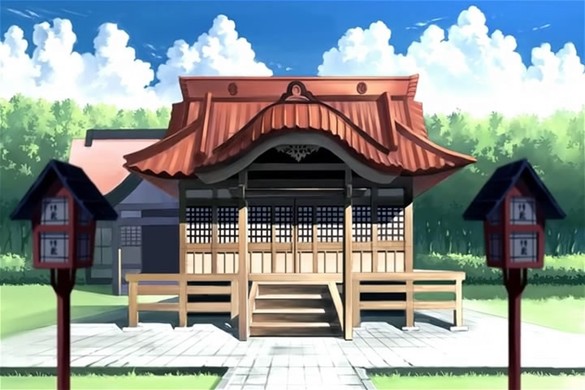 Its the character art where the amateur nature of this show leaps out at you, however.  It's wildly uneven.  Oh, don't get me wrong, you know who you're looking at, but there's something not quite right about it sometimes.  For example... 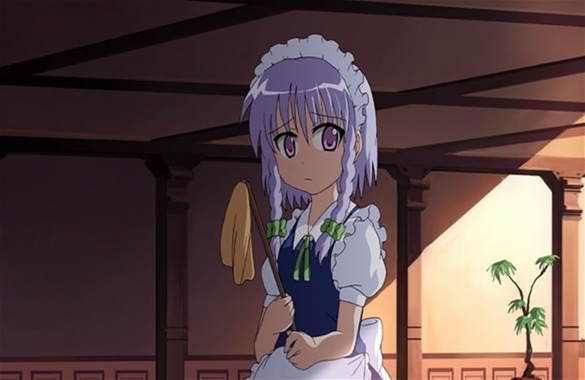 ...she looks perfectly fine (and a little bit like one of the twins from Clannad).  But the next moment, you get something like this: 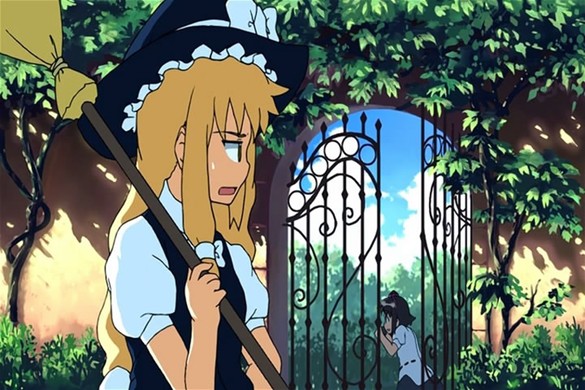 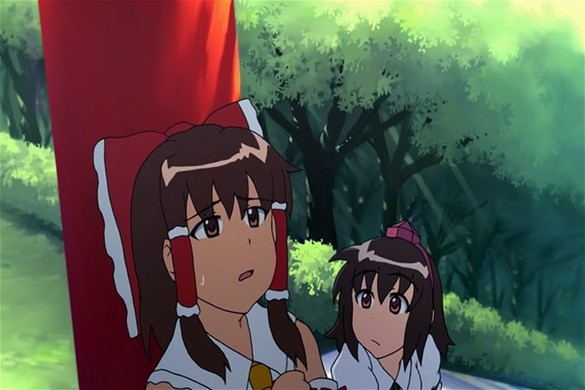 ...which just looks weird.  It's even more obvious when you see them in motion; reminds me of sprites in an old video game, which considering the source material makes sense I suppose.  But then it'll snap back and you get something that looks okay again: 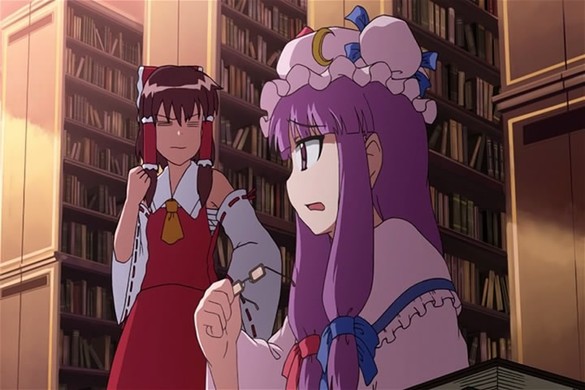 As I said, the character designs and the animation quality is very inconsistent.  The scene where the miko above is walking towards the camera is particularly dreadful... she doesn't so much walk as she does sway from side to side like the floor is the deck on a ship in a bad storm.

Still, doujin.  For an amateur work, it's pretty good stuff.  And the spell animations are good, too: 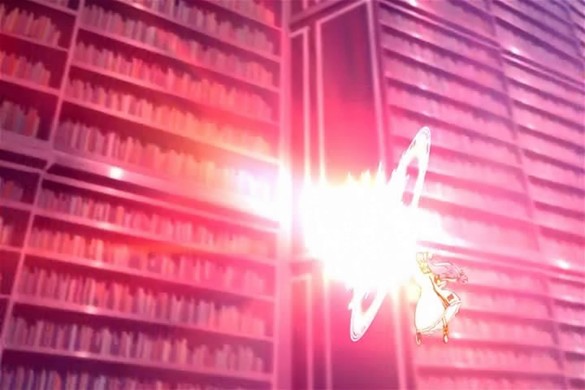 I gather the spells thrown about are actually taken from the games where they act like bombs, clearing the screen of all enemies.

Where this 'amateur anime' truly shines is in the voice work.  It's clear that whatever budget this group had, a sizable percentage went to the seiyuus.  Consider some of the names that worked on this: Rie Tanaka (best known as Yomi from Azumanga Daioh or Wilcke from Strike Witches, but with a gazillion other titles under her belt), Kikuko Inoue (Belldandy from Ah My Goddess TV, Sanae from Clannad), Mikako Takahashi (Chrono from Nanoha, Amy from Burst Angel), Miyuki Sawashiro (Perrine from Strike Witches, the Landlady from Hidamari Sketch), Mai Nakahara (Nagisa from Clannad, Miina from Please Twins, Teana from Nanoha StrikerS), Ayumi Fujimura (Chiharu from Hayate the Combat Butler), Ayumi Tsuji (Elise from Sky Girls, Guchuko from Potomayo), and Aki Toyosaki (Shizuka from Potomayo, Yoshino from Minami-ke).  There's some real names in there, and Rie Tanaka is one of the biggest in the business.  As you can guess, all of the VAs do a great job.  Truely a stunning achievement for this 'amateur' anime.

The plot in this episode is fine: someone has stolen the miko's donation box from her shrine, and she's trying to find it.  Nothing deep, and it gives you the chance to meet the characters and have a chuckle or two along the way, along with some fighting at the end.  About what you'd expect from a first episode of an anime based on a long-running game franchise... fans of the games probably know that there's a ton of backstory behind the shrine or the collection box or whatever.

So what it comes down to is that I'm conflicted about this show.  Everything but the character art and animation is good-to-great.  However, the character art and animation is poor-to-acceptable.  That's a major weakness to have in an animated medium.  Of course, I'm comparing the show to professional anime, and this is decidedly NOT a professional work.  If you look at it like that, Touhou the Anime is outstanding.

Six-of-one, half-dozen of the other.  Certainly good enough to merit a round of applause, considering its origins.  If and/or when episode 2 comes out, I'll watch it.

1 Fandom collectively has sort of been building up to this, mainly via the medium of flash AMVs. There are quite a lot of AMV's out there which feature original animation of the Touhou characters. They're more like what was in the game, which is to say they're more chibi, but it wasn't all that huge a step from that to this.

2 Tough to say what this means for the industry, honestly.

For one thing, it's an outrageous outlier. Touhou's a popular series with an actual public license - the creator explicitly allows people to sell things with his characters, so long as they only do it at comic markets. (This is quite different from the ordinary usually-tolerated-but-not-always policy that most companies follow.) So it's kind of in an unusual situation - enough fans to attract the interest that makes it worth doing (and the manpower that makes it possible), but none of the legal encumbrance.

They got some serious voice talent out there too. Probably a smart move for the VAs in question... if they can establish themselves as "the" voice of those characters, that could potentially become more work in the future, especially if one of the professional anime studios looks at it and decides to hop in there themselves.

There's actually not a ton of back story behind the collection box. The joke is, basically, that nobody ever donates money to the shrine (or that the very occasional donation gets fished out by Marisa, depending on who you ask). The whole episode was a fairly obvious set-up, though, as it's got the same kind of story structure as the games: "something weird is happening and we don't understand why, we'll travel around Gensokyo and try to find the responsible party, incidentally blowing the hell out of anyone who gets in our way even if they had nothing to do with it". (Well, it -is- the story for a curtain-fire game!)

It'll be nice to see if they can sustain the effort long enough for an Alice episode.