F1 on TV: UNITED STATES RED WHITE AND BLUE HOT DOGS APPLE PIE AND HAAS F1!!! *ahem*
Sorry, my patriotism is showing.  Heh.  So the Circus is in Austin Texas this week, Lewis Hamilton has a chance to clinch the driver's championship, and it's raining.  That might prove an interesting combination come Sunday.  Here's the track map: 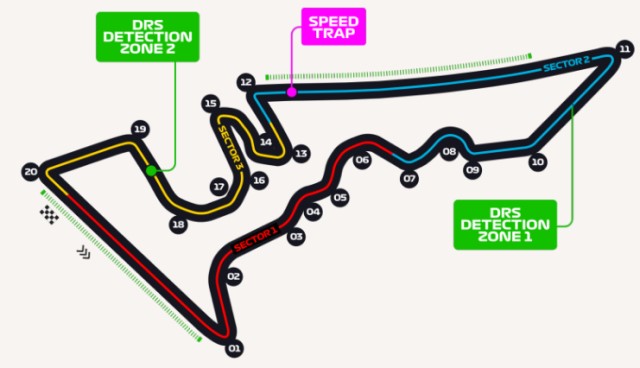 Hasn't changed since the first time they raced here, though they did add a new DRS detection zone since then.  The unofficially-named-but-it-should-totally-be-called Phil Hill up to Turn 01 is still the dominant feature of the circuit, but what I'm considering nicknaming The Wobbles (Turns 03 - 09) is a signature as well.  No, literally, that's how Hermann Tilke signs his name.
Since this is the United States Grand Prix, we'll be getting coverage on The Big Network this time around... the race will be on ABC!  P3 and Quals are on ESPNews, though.  Check your locals for time in your place of abode.  Here at Pond Central, the race is at 1pm.
It's starting to look a lot more like Vettel's done for this weekend.  He's been handed a three-spot grid penalty for not slowing down enough during a red flag in practice today.  This is consistent with other such penalties, it's just awful timing for the German who's been making quite a few mistakes of late..  Throw in expected rain during Quals, Lewis Hamilton's all-encompassing superiority in the rain, and his utter domination of the Circuit of the Americas, and... well.
Quals is in the late afternoon, report afters, see ya then!  Byeeeeeeeee!

1 "So the Circus is in Austin Texas this week, Lewis Hamilton has a chance to clinch the driver's championship, and it's raining."
Why yes, yes, it is.

2 We'll let you know how it looks from the turn 9 grandstand.