Not Quite F1 Pr0n... Yet Today, Mercedes-Sauber F1 debuted... their paintjob. 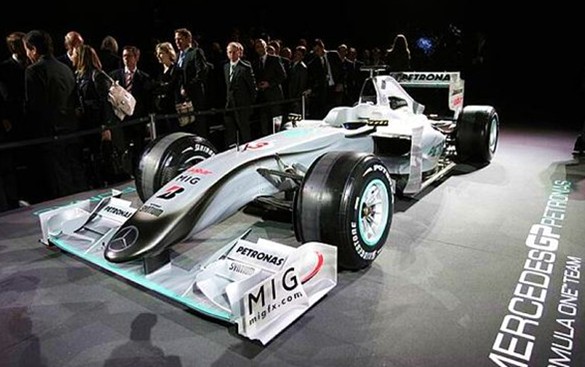 The idea behind the livery is that it's a throwback to the original "silver arrows" of Mercedes.  Back in the day-- if the day you're talking about is 1934 or thereabouts-- the Mercedes team was going to join the  Eifelrennen, but their car was too heavy for the weight restrictions.  So the night before, the team sanded all the paint off, leaving just the silver chassis behind.

And a legend was born.  Today's paintjob is meant to pay tribute to that one (which really wasn't a paintjob).  The car is (obviously) silver, but has part of it "sanded off", revealing the black carbon fiber underneath (not really, it's just paint, but run with it, okay?).  The greenish-blue on the leading edges of the nose and other places is the color of Petronas, the team's major sponsor.

The chassis this paintjob (actually, vinyl decal, but let's go with paintjob) is on isn't the 2010 MGP W01, but last year's Brawn car.  We should be seeing the new car later this week, when the first FIA practice session begins.  So stay tuned!

1 Wow, that's quite an impressive paintjob!  So glad the pre-season hype has started.

2 Is it really legal for the front wing to be so low to the ground?

4 The idea is to move the front wing out of the turbulence created by the rear wing of the car in front. But of course it does not work because the rest of car body creates vortexes too.