F1 on SPEED!: Turkey 2010 and Formula 1 Returns to the USA! First off, Birdy Ecclestone announced today that the city of Austin, Texas will be hosting the US Grand Prix beginning in 2012.  A purpose-built facility will be created for the event, the first time a F1-level track has been built in the US.  Good job, Birdy!

Now, onto the current season!  F1 makes its way to Istanbul this week, home of the only Hermann Tilke circuit that's worth a darn.  Let's take a look at the map. 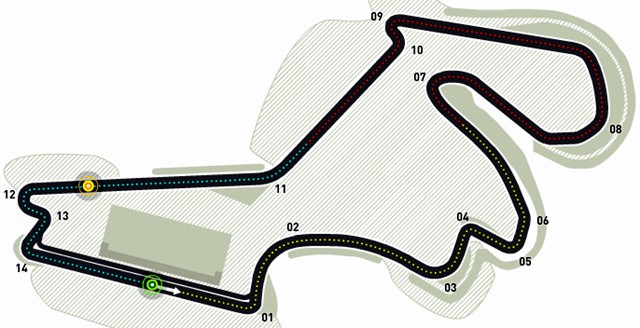 There are three turns on this track that are memorable.  Turn 1 has been compared to a junior version of Laguna Seca's famed Corkscrew, though without the radical elevation change (and wouldn't a flock of F1 cars negotiating that be something to see?).  Turn 11 has jokingly been called "Faux Rouge", as it's a high-speed kink on a hillside, just like the original Eau Rouge at Spa-Francopants.

But it's Turn 8 that elevates this circuit from "okay" to "great."  A four-apex corner (which I've called "Quad-8" for years), it's a blisteringly high speed/high risk bend.  Get it right in qualifying, and you're on pole.  Get it wrong, and you're headed towards the very distant catch fencing... backwards.  Nobody's quite made it there yet, but some have given it a mighty effort... I seem to remember Christian Klein a couple of years back coming within a couple of car-lengths.  Backwards.  Quad-8 is probably Tilke's finest creation.

Of course, Turkey is certainly his best track, too, and it's all due to the land it's on.  Unlike Malaysia, China, Bahrain, etc etc, the Istanbul Otodrom (I don't care what they call it now) is built on terrain that features hills.  Hills mean elevation changes, and that means it actually feels like you're going somewhere.  Drivers love that, which is one of the reasons that Spa is so popular.

All is not sweetness and light in Turkey, however.  Just like the circuit at Shanghai, drivers believe that the track is getting bumpier as it ages, particularly at Quad-8.  It's hard enough to make that turn successfully, I can only imagine how grumpy an uneven surface will make the drivers.

Fortunately, we won't HAVE to imagine it, for SPEED will bring us their usual fine coverage beginning with 2nd Practice on Friday, live, from 6am to 740am.  Quals follows the next day, from 6am to 7am... at least, that's how the schedule reads.  To be safe, set your VCR for 730am.

The 2010 Grand Prix of Turkey comes our way LIVE on Sunday, from 630am to 9am, with a replay on Tuesday from 11am to 130pm.  Hopefully my VCR woes will be gone by then, otherwise it'll be another late F1 UPDATE!.  However, rest assured that we WILL be here for you!

1 In other news the BBC is reporting that  Formula 1 to make US return at new Austin Tx track in 2012Now this will play merry hell with the other races as no one wants to be in the Tx sun in summer. Ah, Bernie you gotta love'm.

2 vonKrag, did you even bother reading this post before adding your comment? Hint: look at the first sentence.

Whoohoo, a US race!  Wonder what went into the choice of Austin?

Red Bull has Mark Webber narrating a lap in their simulator here http://www.youtube.com/watch?v=dTKwgNP9_es It's Turkey this week BTW. I liked very much the info on loadings on him and the car.